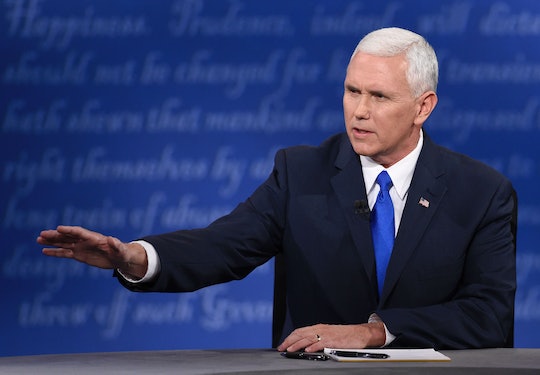 The first and only vice presidential debate at Longwood University in Farmville, Virginia wasn't as much of a snooze-fest as it was expected to be. The candidates were both ready to defend their running mate and things quickly got a little tense. At one point, Republican vice presidential nominee Mike Pence criticized Tim Kaine for being prepared, which was a little ridiculous for a few reasons.

First, his running mate Donald Trump bragged about not preparing for last week's presidential debate and sort of dropped the ball. Second, Pence spokespeople have been talking about much the veep candidate had been preparing all weekend, even running mock debates with Wisconsin Gov. Scott Walker, according to CNN. So what's so bad about being prepared?

Over the weekend, Pence said that he had done all the "hard work" and had been reviewing "binders" of information about policy and even his past congressional record in case he had to defend older positions of his own. That's preparing. During the debate he took a jab at Kaine and Democratic nominee Hillary Clinton for using "old lines," like Clinton's "Trumped up trickle down economics" or when Kaine refers to Trump as "hiring and firing." He was being sarcastic about their one-liners. But that's the point of these debates.

Not having a pre-prepared talking point is a very risky move. Kind of like the ones that Trump took last week when he uttered, "that's smart," in regards to not paying income tax or when he joked about how he should address Clinton. "Speaking from the heart" sounds like a good, authentic thing to do. And it normally is. But politics is not a normal situation and when you're on a national stage fighting for the Oval Office — the most powerful job in the world — you should be prepared and you should have talking points that back up your message so that voters can remember what you're all about.

That's smart, political strategy. But Trump and Pence supporters like that Trump "speaks from his heart." They like that politically incorrect things slip out of the real estate mogul's mouth. That's part of his appeal, which is just fine. But Pence shouldn't pretend that he didn't study up for two weeks, because he did. His travel schedule has been lighter for weeks so that he could study, according to CNN. So it's not authentic or honest to attack Kaine (and Clinton) for being prepared like it's some sign of weakness.

It's not. Voters should hope that presidents and their right-hand person know what they're talking about.