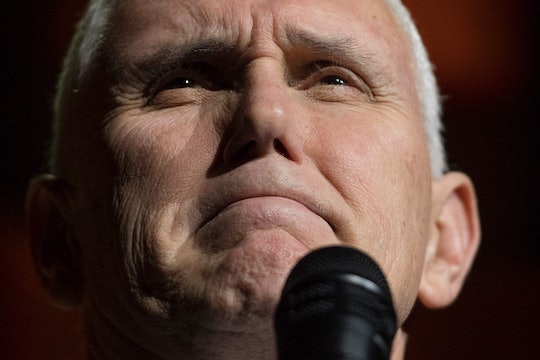 "When they go low, go high," former first lady Michelle Obama told the country at the Democratic National Convention in July last year. On that night, the nation seemed to be on the precipice of truly electing its first female president, former Secretary of State Hillary Clinton. But oh, how that changed now that President-elect Donald J. Trump is set to take the oath of office in just minutes. Even on Inauguration Day, the day had a few signature Trump gaffes, or, in Vice President-elect Mike Pence's case, a really classless move on the inauguration podium. Mike Pence didn't shake Hillary Clinton's hand — despite her offering it to him and the world took quick, disappointed notice.

After the introduction of President Obama and Vice President Biden, Vice President-elect Mike Pence was introduced to the inauguration podium, just a few minutes after Bill and Hillary Clinton were introduced. Pence approached the former president, extending his hand, then merely nodded at his former Democratic opponent. Pence then moved right past her, extending his hand to a man standing to Hillary's left. Hillary then extended her hand to Pence, who clearly saw it and refused it entirely. It was a very awkward and extremely telling moment on Inauguration Day.

Some eagle-eyed Twitter users also noticed that Pence didn't shake the Obamas' or the Bidens' hands, either.

It's one thing if you're a newcomer and you don't know White House gift-giving protocol. But Pence is hardly some kind of greenhorn politician and knows full well the kind of gestures of bare-minimum civility he should be making at an event as momentous — and televised — as the inauguration. Snubbing both the Obamas' and the Bidens' handshakes was a pretty spectacularly disrespectful move. Pence doesn't have to be a fan of the previous administration, but at least show some goddamned respect for the office.

As for snubbing Hillary, maybe it's time for Pence to prove to the American people that he's ready to move on from the divisiveness he preached about on the campaign trail. That move wasn't just some kind of Salt Bae shade — it was petty and petulant. Well, you know what they say: Actions speak louder than words, and apparently, Pence's inaction to even do the decent thing of shaking your predecessors' and former opponents' hands says a whole lot about the kind of person our newest Vice President really is.