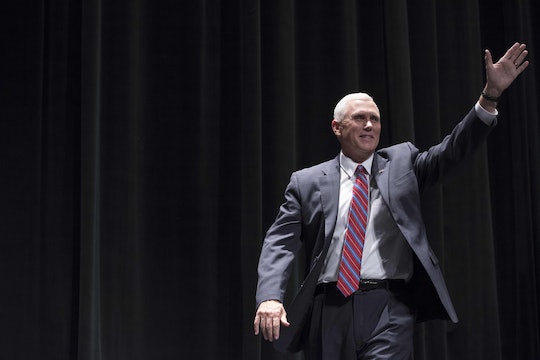 Regardless of one's political leanings, there are a few essentials for properly watching a debate. One needs their thinking cap, unlimited amounts of snacks, duh, and a sense of humor. Luckily, the number of Mike Pence memes from the vice presidential debate have you covered on that last one.

In the past, vice presidential debates have been throwaway events that only the truly dedicated and politically obsessed watch. But this election year is a whole different story. Last week, Hillary Clinton and Donald Trump had an epic showdown and it was up to the vice presidential candidates to keep the momentum going for their respective campaigns. Virginia Sen. Tim Kaine had an easier job ahead of him for the night, since he and Clinton have been enjoying a post-debate bump in the polls. Indiana Gov. Mike Pence had a tougher job for the night; the Trump campaign has had a rough week and, given the timing of the debate schedule, Pence was expected to somehow defend his running mate, while also making it look like the campaign was empathetic to all the different groups of people Trump had offended in the past six days.

Not an easy gig, at all. These memes of Pence clearly show how stuck he was between a rock and a hard place (and raise questions about the governor's own policies and ideas for the country's future).

Although Trump bragged about not really preparing for the first presidential debate, Pence has been doing his homework. He's been studying "binders" of policy and brushing up on his facts, according to CNN. Pence also stepped back a little from the campaign trail this week to hold mock debates with Wisconsin Gov. Scott Walker. Pence studied up on his own congressional record, too, since it's been a while since he's been a representative and it was expected that moderator Elaine Quijano and Kaine would bring up some of his past votes.

It's never a good sign when someone has to study their own views and votes on past legislation, but on Tuesday night Pence didn't miss too many beats. Brett O’Donnell, a Republican communications specialist told The New York Times that the real goal of the vice presidential debates is pretty simple: "don't screw up." O'Donnell added that the "big thing is to defend the top of the ticket and then go on the offensive as much as possible against your opponent — the top of the ticket on the other side.”

Whether Pence was successful or not will be up to voters come November. For now, just enjoy that glass of wine and scrolling through the social media banter.