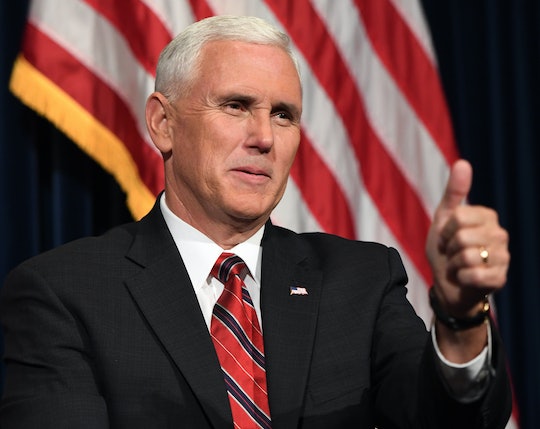 By now, Hillary Clinton has been fully excoriated for her comment on Friday that half of Donald Trump's supporters belonged in a "basket of deplorables." Though she apologized the next day, stating that she regretted saying "half," the Trump campaign is milking the slip-up for all it's worth. But when Trump's running mate, Indiana Gov. Mike Pence, refuses to call David Duke "deplorable," it only highlights the point that Clinton was expressing (in a much more nuanced way than sound bytes might have you believe)—that the Trump campaign woos hateful voters and gives them a platform for spreading their hate, not caring about what they believe as long as they have their vote.

On Monday, Pence spoke with CNN's Wolf Blitzer in a televised interview. Blitzer brought up the Clinton comment, and asked if Pence would call Trump supporter and former Ku Klux Klan grand wizard David Duke "deplorable." Although he said he did not want Duke's support, Pence declined to say Duke was deplorable, saying instead, "No, I'm not in the name-calling business."

And on the one hand, there's something admirable in that. As your parents probably taught you from a young age, name-calling is not nice. But I'm not so sure that labeling David Duke "deplorable" and "racist" (a word Clinton later used in her remarks) is name-calling, rather than a factual statement. Let's look at some definitions for a minute. According to Dictionary.com, "deplorable" means "causing or being a subject for censure, reproach, or disapproval; wretched; very bad." And "racist" means "a person who believes...the doctrine that one's own racial group is superior or that a particular racial group is inferior to the others."

And now let's talk about David Duke. He is a white supremacist who was a leader of the Ku Klux Klan before forming the National Association for the Advancement of White People. He is a Nazi sympathizer who has said that Trump might help "rehabilitate" Hitler's image.

Pence says that Clinton's remark was "shocking." But what is so shocking about saying that a person who actively tries to spread the ideology that white people are the superior race is a racist? And what's so bad about saying that racism is deplorable? I think that, by now, we've sufficiently established that people are equal and should be treated as such. We've written equal protection into the laws of our country. People who violate that and harm or harass others based on their race are deserving of censure and reproach.

After the interview, Pence tweeted that "some members of the media are taking quotes out of context," repeating that he has previously denounced Duke.

Still, the whole Trump/Pence campaign has seemed to have a certain "wink wink nudge nudge" attitude about voters who share Duke's beliefs. Pence can claim outrage all he wants, but as long as Trump continues to retweet white supremacists, insult a Muslim soldier's parents, and whip up crowds into chants of "Build the wall," Clinton's "deplorables" comment rings a bit true.