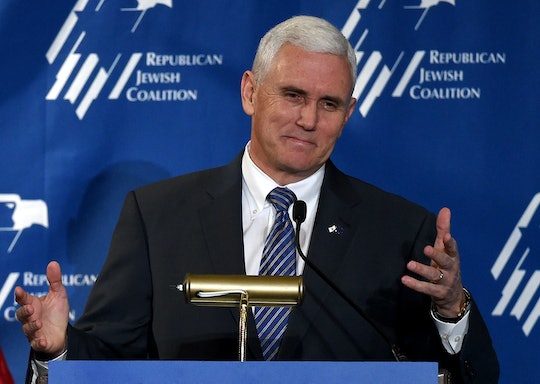 The campaign team of presidential candidate Donald Trump has sent some pretty strong signals that Mike Pence, the governor of Indiana, could be announced as Trump's running mate. While that is big news for the Republican Party, the good people of Twitter have made an apt discovery. No, not about Pence's political career or his platform — just that he looks like a certain martini-loving cast member of Mad Men. The internet's Mike Pence and Roger Sterling comparisons are uncanny. Sadly, Pence is nowhere near as suave and lovable as his celebrity doppelgänger.

Unlike Sterling, Pence is known for his Christian faith and support of "the traditional family," according to the Indy Star. He's used that platform to unleash several socially conservative laws on the people of Indiana, many of which it is very doubtful Sterling would support. In Episode 4, Season 1 of Mad Men, Sterling said, "Maybe every generation thinks the next one is the end of it all. Bet there are people in the Bible walking around, complaining about kids today." Though Sterling had his own qualms with the youngsters of New York, he was able to open his mind (with the help of LSD) and eventually joined them. Pence has never shown much propensity for open-mindedness. One of his claims to fame is proposing a law, similar to North Carolina's House Bill 2, that posed as protections for religious freedom but actually allowed discrimination against LGBT people, according to the Chicago Tribune.

Also unlike Sterling, Pence is staunchly anti-abortion, and the women of Indiana have him to thank for some of the strictest abortion laws in the country, according to Broadly. (Some provisions include women having to pay for the funerals of their fetuses, and the illegality of abortion based on fetal disability.) Sterling, on the other hand, is very pro-choice, but he also loves babies. His beliefs on the matter lie somewhere between fate and his next drink. In his words, "When God closes a door, he opens a dress."

While Pence and Sterling look alike, Sterling is much more similar in character to Trump. He once said, "Nobody knows what I'm doing. It's good for mystique." The same could be said for the Trump media strategy. (Or, maybe even better: "Well, I gotta go learn a bunch of people's names before I fire them.") Pence, on the other hand, is incredibly predictable. His platform is to the far right, even for the Republican Party, according to The New York Times. In that way, picking him to be vice president makes a lot of sense. Trump and Pence will be foils for each other in terms of temperament, but as far as their platform goes, it will no doubt continue to challenge the constitutional rights of women, LGBT people, low-income people, and minorities. That's something they both can agree on. (Sterling, again with the one-liners: “Isn't there a section of this meeting called ‘good news’?”)

So what advice would Sterling have for Pence if he becomes Trump's running mate? Being an ad man, he's had years of experience working with partners, working with clients, and working with creative people. Perhaps the most apt pearl of wisdom about partnership is this: "You know what my father used to say? Being with a client is like being in a marriage. Sometimes you get into it for the wrong reasons, and eventually, they hit you in the face." Be warned, Pence.