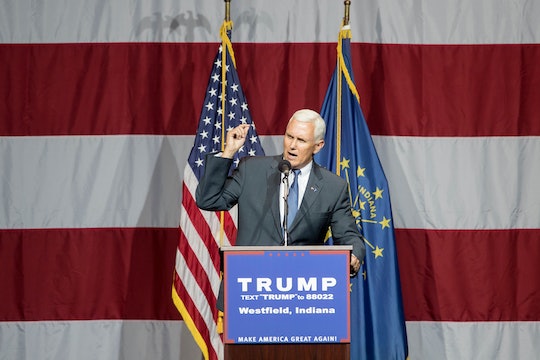 Though the Trump campaign has yet to confirm it, it looks like Indiana Gov. Mike Pence will be chosen as Trump's running mate and potential vice president on Friday. The pick is going to be welcome news to social conservatives who want a candidate like Mike Pence, whose positions on LGBT rights have always fallen in line with the religious right.

But while speculation of a Pence pick is flying, Trump's Senior Communications Advisor Jason Miller sent out a couple of tweets throwing cold water on the notion of an early leak of the VP choice.

Still, the IndyStar, Pence's hometown newspaper, reported that it confirmed Pence will be announced as Trump's running mate because Pence has dropped out of his bid for re-election as governor. According to Indiana law, Pence wouldn't have been able to run for vice president and Indiana governor at the same time, and the deadline for him to file is Friday.

Many speculate Pence was particularly keen to get tapped for the VP slot, since his approval ratings are lower than disapproval in Indiana, 42 percent to 40 percent according to CBS News, making his chances for re-election dicey at best.

Pence is a social conservative who has long championed measures in his home state of Indiana, like his position that LGBT citizens shouldn't be protected from discrimination on the basis that religion gives people the right to refuse service or refuse to associate with people, even if the way in which they do it is discriminatory, according to the IndyStar.

"I will not support any bill that diminishes the religious freedom of Hoosiers or that interferes with the constitutional rights of our citizens to live out their beliefs in worship, service or work," Pence said.

This is exactly what evangelicals Trump needs to win over want to hear. The right-leaning Washington Times explained Pence's appeal to religious conservatives this way:

Mr. Pence has described himself as Christian, conservative and Republican, in that order. For those within the GOP skeptical of whether Mr. Trump is any of those things, a Pence pick would go far. Evangelicals are a key voting bloc and grass-roots organizer in any GOP primary, and Mr. Trump needs them to help proselytize his candidacy in order to have a chance in November.

Pence has other qualities Republican voters might not see in Trump, including 12 years experience serving in Congress, and a good relationship with House Speaker Paul Ryan, a powerful force in national Republican politics who has often been at odds with Trump, according to the Washington Times.

ABC News also reported that Pence is "unflappable," and he has described himself as "Rush Limbaugh on decaf."

Republican pollster Christine Matthews put it this way to ABC, "One thing you can say about Mike Pence is he's got a very calm, steady demeanor that in some ways is a little Reaganesque," she said. "He's a counterbalance to Trump in that way."