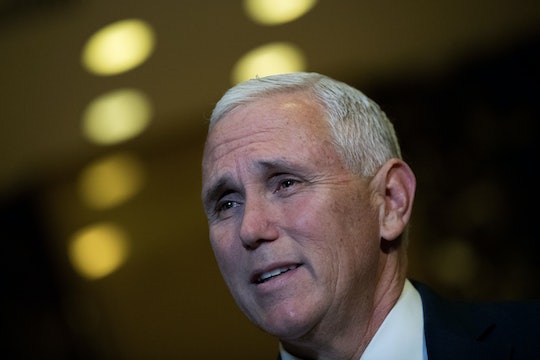 Vice President-elect Mike Pence did something very surprising on Friday. No, he didn't roll back his stance on women's reproductive rights. Unfortunately. Donald Trump's running mate went to see a performance of the hit Broadway musical Hamilton, a story that talks a great deal about issues still plaguing our country today and features a diverse ensemble cast. The cast of this show, as well as many fans who love and find solace in it, are people who might potentially disagree with a multitude of both Pence's and Trump's political beliefs. Pence was booed when he arrived at the Richard Rogers Theater in New York City, as well as personally addressed by the cast at the end of the show. Brandon Victor Nixon, who plays Vice President Aaron Burr in the production, addressed Pence personally, saying he hoped the message would inspire the Trump administration to "uphold our American values and to work on behalf of all of us." There was, of course, a huge amount of backlash from Trump supporters on the internet, including from the president-elect himself. Pence's response to Hamilton's message, though, was surprisingly even-handed.

Pence made an appearance on Fox News Sunday following his widely discussed visit to the theater on Friday. He revealed that he "wasn't offended" by Nixon's plea, then went on to call the musical a "great, great show" and said it was a "real joy to be there." Pence described what it was like to arrive boos, and some cheers, at the Richard Rogers Theatre. Pence said he nudged his kids and said "that's what freedom sounds like."

Pence did, however, take a moment to disagree with the venue in which he was subjected to the sounds of freedom. "I'll leave it to others whether it was the most appropriate venue to say it," Pence said during Sunday's interview, "I know this is a very disappointing time for people who did not see their candidate win in a national election. I know this is a very anxious time for some people."

Pence's response was certainly calm and level headed, however, the same can't be said for his running mate. Trump was quick to use his beloved Twitter account to lash out at the popular musical's cast, writing in a series of posts,

Trump has made bombastic Twitter rants his trademark this election, so his posts about the vice president-elect's trip to Hamilton were definitely tone deaf, but in no way surprising. In turn, the backlash to Trump's backlash was both quick and furious. The president-elect had everybody from Chrissy Teigen to Dan Pfeiffer, Former Senior Advisor to President Obama weighing in on the story.

Some are theorizing, Pfeiffer included, that Trump used this to his advantage, creating a media firestorm over Pence's Friday night plans to distract from his Cabinet selections and his Trump University settlement; In the hours after Trump shared his two-cents on Twitter, demanding that the cast of Hamilton apologize for harassing Pence, "Trump Hamilton" surpassed "Trump University" in searches on Google.

Apart from Trump potentially leveraging Pence's unpopularity in New York City to distract from his current scandals, this whole debacle gave the vice president-elect a stage to appear like a completely rational person. Pence's response to the jeers he received from the crowd at Hamilton was mature and even-handed, sure, but the man still believes in conversion therapy for the LGBTQ community. Pence still wants to return Roe v. Wade "to the ash heap of history where it belongs." Just because he can handle a few unhappy theater-goers, doesn't mean we should look at Pence in a better light than we did before.

Pence was right about one thing, though: This is a very anxious time for some people. We must stay vigilant and work harder than ever to make this country a safe and special place for everyone, regardless of their colors, creeds, or orientations.