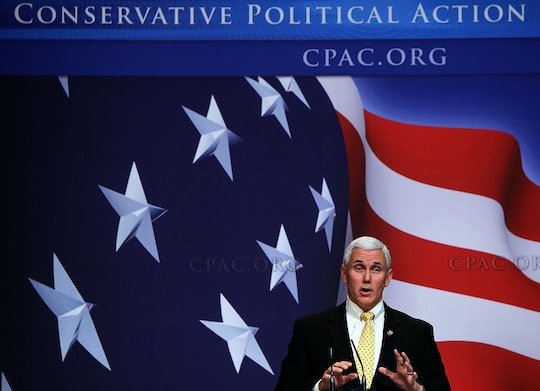 Mike Pence's Tweets Prove He's Trump's Polar Opposite (On Social Media, That Is)

Donald Trump and Mike Pence are similar in a lot of ways, which is why Thursday's report that the presumptive GOP nominee had selected the Indiana governor as his 2016 running mate wasn't totally surprising (though nonetheless shocking). Both men have made waves with controversial statements and right wing rhetoric, and, in the latter's case, with headline grabbing religious freedom bills that prompted a flurry of criticism. Both men are unafraid to ruffle feathers and would provide one of the most aggressively unapologetic Republican tickets in years. However, over on social media, Pence's tweets prove that he's Trump's polar opposite in one very crucial way.

While Trump is more than happy to use his personal Twitter account as a platform to bludgeon his rivals and critics — most notably to call out others as "losers," "weak," or (everyone's personal favorite) "sad" — Pence largely avoids stating anything too controversial from his perch on the social media network. Rather than calling out Democrats or liberals with a litany of ad hominem attacks, Pence uses his account to promote causes he believes in and budgetary legislation that benefits his constituents. Think "This budget package will help all working civilians of Indiana and will move us in the right direction" versus "This budget package will help us, and anyone who says otherwise is a dishonest LOSER. Sad."

In fact, if the situation weren't so perilous and the two men's political agendas so high-strung, the Pence/Trump Twitter compare and contrast might be almost comical. It's possible, of course, that Pence's account is simply better managed and that his position in government requires him to show restraint. But the dissimilarities are hard to ignore.

In addition to promoting his state's successes, Pence tends to use his Twitter account to highlight his visits (however staged) to minority communities and his educational advocacy. "Privileged today to honor our Mr. & Miss Math & Science winners for their early successes and pursuit of excellence," Pence tweeted on Tuesday, posting a photo of himself with a group of students. In a similar tweet on Monday, Pence posted a photo of himself meeting with ex-offenders to promote the faith-based Indy Ten Point Coalition, which seeks to open up job opportunities for former inmates. "... We visited [metal company] Reiss Welding who have partnered with Indy Ten Point to give ex-offenders a 2nd chance," Pence tweeted enthusiastically.

In contrast, on Tuesday, Trump tweeted that Bernie Sanders had "sold out" to "Crooked Hillary," and that Justice Ruth Bader Ginsburg's mind was "shot."

No word yet on whether Trump will be taking social media lessons from Pence, should the Indiana governor officially join the Trump ticket on Friday.