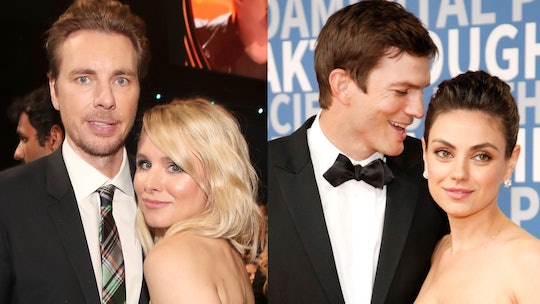 Mila Kunis and Ashton Kutcher; Kristen Bell and Dax Shepherd. Those are four powerful Hollywood actors, and two Hollywood power couples. So it really shouldn't be a surprise that the foursome are all friends in real life. But Mila Kunis and Ashton Kutcher's Christmas gift for Kristen Bell and Dax Shepherd is definitely a surprise — and a hilarious one.

This weekend, Shepard Instagrammed a photo of himself and Kutcher holding up Kutcher and Kunis' epic, custom-made Christmas gift for the Shepard-Bell household: a shower curtain with a photo of Kunis and Kutcher on it. "What a generous Christmas gift from the Kunis-Kutcher family. A beautiful shower curtain for the attic(t) bathroom!" Shepard captioned the shot. Yes, this gift is pretty amazing without any context, but it's actually even better when you know the backstory.

Back in July, Shepard interviewed Kunis for his podcast, Armchair Expert, as People reported. As Shepard often mentions during the podcast, most episodes are recorded in the attic of the house he shares with Bell. Unfortunately for guests, the attic is not 100 percent finished, and the bathroom up there doesn't even have a door. Well, Kunis had to pee, and she doesn't embarrass easily. So, she went for it, and peed in the open-door bathroom.

Shepard shared the details of Kunis' fearless pee in a tweet back in July. "This beauty was the first to pee in our open door bathroom with all of us in the room," Shepard tweeted alongside a photo of himself and Kunis. "Which is only further proof to what a baller she is. The super cool, lovely and talented Mila Kunis is on the podcast now!" So basically, Kunis and Kutcher got Shepard and Bell this gorgeous shower curtain to aid them in the process of finishing their bathroom.

And this gift was not just for show — the two Hollywood couples really are actually great friends with each other. Kutcher and Shepard's friendship goes way back to the days of Punk'd, according to ET Online. And in an appearance on The Ellen Show last week, Kutcher told Ellen DeGeneres that the talk show host that appearances on her show helped bring him and Shepard closer together. Furthermore, Shepard recently joined the cast of The Ranch, the Netflix show in which Kutcher stars.

As for Bell and Kunis, the two actresses both star in the Bad Moms movies. From watching hours of interview with the two of them and Kathryn Hahn (something I have devoted my personal time to), it's clear that the three women have a great dynamic with each other in real life. Not to mention, each couple has two children around the same ages. According to People, Shepard and Bell have two daughters, Lincoln, 5, and Delta, almost 4; and Kunis and Kutcher share a girl named Wyatt, 4, and a boy named Dimitri, 2.

It's always nice to hear that well-loved celebrities are down to earth enough to be pals in real life. Hopefully Shepard and Bell will get Kunis and Kutcher back with an equally hilarious gift this holiday season.