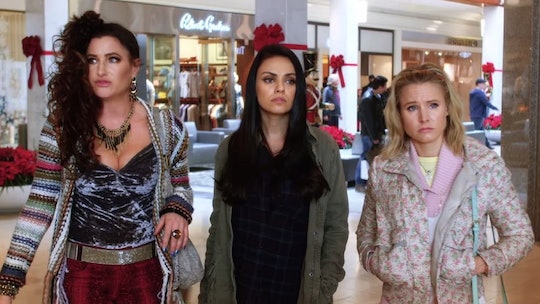 Atlanta's Lenox Square Mall is just set to close for the night as Christmas trees are placed, tinsel is hung, and hundreds of background actors throw on their heavy winter coats. It is May, it is 80 degrees, and Christmas has come early on the set of A Bad Moms Christmas, out Nov. 1, the sequel to the 2016 comedy, Bad Moms. The original cast — Mila Kunis, Kristen Bell, and Kathryn Hahn — have returned for the sequel, plus a few new yet familiar faces.

The original Bad Moms followed three unlikely friends who come together in disdain for the PTA leader, Gwendolyn. Through debauchery and a really ugly PTA presidential election, the three moms learn that there are some serious upsides to making mistakes and pushing against the myth of the perfect mom. That idea comes into full glory in the scene they are filming this late May night for A Bad Moms Christmas.

It is a night shoot, the mall has been emptied of customers — though some stragglers stay behind to catch a glimpse of the action — and let's just say the Williams-Sonoma looks festive for May 11. Kunis, Bell, and Hahn are filming a scene where they wreak havoc on the mall, spike apple cider samples outside a shop, and take over the mall's PA system, spreading a message many moms during the holidays can identify with: when you're a mom, Christmas can suck.

Over the course of a handful of takes, the actresses sprint down the mall's decorated corridor and stop in front of a store where a rather unsuspecting and festive worker is seen holding up a tray of seasonally-themed apple cider. The women, blood pumping with the holiday spirit, run up to the woman with a bottle of whiskey and douse the tray of PG-samples with real holiday spirits.

The spree encapsulates the fundamentally feminist — and just fun — message behind the debauchery and chaos Bad Moms sells: women, or — gasp — moms can get drunk, be loud, and just in time for the holidays, be naughty. Benders, chaos, and "bad-ness" are common in a lot of male-lead films, but in a post-Bridesmaids world, where film and television more regularly present women as complex and at times unlikeable, A Bad Mom's Christmas is doing the same for moms — portraying them as mischievous and irresponsible and not quite done with adolescence. And there's no better setting for busting the myth of pious, bland suburban motherhood than the mall. Cue Kristen Bell giving Santa a lap dance.

"[The movie] points to the fact that characters are flawed," Kunis says to reporters on set, noting that Amy, Kiki, and Carla (played by Kunis, Bell, and Hahn, respectively) are rejections of the perfect "1950s stay-at-home mom character." Amy buys store bought donuts for the PTA's bake sale; Kiki is quite buttoned-up ("A little argyle goes a long way," Bell tells reporters) and doesn't allow herself to let loose, like ever; and Carla has a very hands-off approach to parenting.

"There's nothing funny about perfection," Bell says in a moment that brings a hush to the crowd. "That's a good line," someone mumbles in between the group's laughter. "It's not mine," Bell confesses. "I'm just repeating it."

But she's right. What made the first film funny was how far the characters strayed from the perfect mom archetype — in a way that, instead of mocking women with kids, mocks the standards they are held to. In the first film, Amy, Kiki, and Carla find themselves rebelling from the PTA bake sale, partying, and getting their kids fast food for lunch. Amy goes head-to-head with Gwendolyn (the PTA incumbent) for the PTA president role, eventually winning people over after encouraging an audience of mothers to allow themselves to make mistakes and de-stress from their already hectic lives.

Bell notes that A Bad Moms Christmas also allows female characters to break free of oft-misrepresented tropes of the "everyday mom" who is running around the house doing everything for everyone but herself. "It doesn't show women being stressed out and have that be their arc," Bell said. Instead, the film isn't afraid to show women who want something different, and as Kunis puts it, "Pursue it, struggle with it, and find ways to either get it or fail."

"The idea of the first movie is to tear down some of these personal and societal and cultural norms of both torturing ourselves about not being good enough and allowing other people to put us in a place of self-doubt about how we mother our children," producer Suzanne Todd says. "This idea that it's never the right lunch, or in this case, it's never a good enough Christmas present. It's not helping us and it's not helping our children." The franchise, as Todd says, creates a collective feeling that mothers can push back against the "norms" and say, "I did the best I could and I'm doing this with great intentions, and I can feel good about it."

As with any sequel, you toe a fine line: do what people liked the first time, but make it kind of different. "We wanted to avoid the thing of, like, you just make the same movie again," co-director and co-writer Jon Lucas says. "We've all been to those sequels where you're like, 'Oh my God, they literally just made the first one again.'" That's where Christine Baranski, Cheryl Hines, and Susan Sarandon — the moms of the moms — come in, ready to be entertained by their daughters, who are already struggling to stay afloat this holiday season.

Things don't go perfectly, as you can expect from a comedy — what doesn't go wrong when your mother comes to town? But at its core, the film is about accepting those you love for who they are, flaws and all. The goal, besides making a fun standards-busting movie that will make people laugh, is to encourage "women or mothers or daughters to understand where the other is coming from," Kunis says.

That's often easier said than done, and Kunis, Bell, and Hahn, all mothers, are already preparing for their kids to realize how "lame" they are.

"I am totally nervous about it," Kathryn Hahn says, while laughing.

"I have this conversation a lot at home," Bell says. "My husband [Dax Shepard] and I look at our kids and we go, no matter how cool we are, and how much we give them, they're going to look at us at some point and go, 'They're so lame. They're so annoying.'"

At this point in the day, Kunis, Bell, and Hahn are wide awake. It's midnight, I'm kind of tired, but the cast and crew have a long night ahead of them. Kunis, Bell, and Hahn are filming for the 10 hours the mall is closed, and somewhere nearby, their kids are (probably) fast asleep. These are all women who speak out about what they believe in, tonight they stay up until the sun rises, they swear, and they admit to being raunchy. In all senses of the title, they are Bad Moms, and that's probably what makes them such great parents, too.

"Hardworking and advocating," is how Kunis hopes her kids will one day describe her, she says when I ask. Bell says that she hopes her kids see her as "kind and respectable."

"And like the movie says," Hahn chimes in, "just doing the best we can."