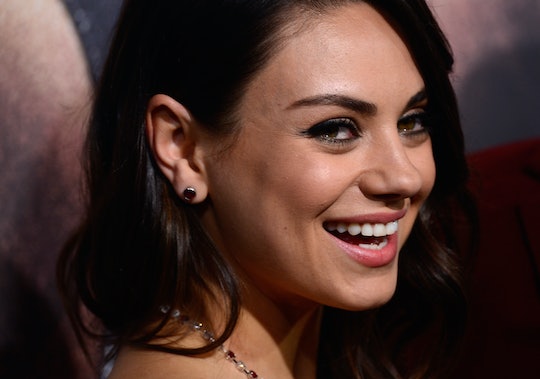 There's only so much a parent can learn from books and websites. Learning how to change a diaper or advocate for a 504 plan is pretty cut-and-dried, but the best parents seem to be born with an instinct for raising their kids well. Lucky for Wyatt and Dimitri Kutcher, it seems like their mother was born with that gene, because Mila Kunis' quotes about her kids show that her parenting philosophy is bound to turn out some pretty awesome humans. Above all, she appears to value honesty, whether she's talking about her children, or talking to them. As she's said in multiple interviews, she and her husband, Ashton Kutcher, have a very simply goal: not raising their kids to be a*sholes.

Kunis credits her upbringing as a poor immigrant with teaching her the value of a dollar and instilling a strong work ethic, and she and Kutcher plan to pass on those lessons. They may be rich and famous, but they're not going to let their kids become entitled. "It's a matter of teaching them from a very early age that, you know, 'Mommy and Daddy may have a dollar, but you're poor,'" she explained during an appearance on Australian podcast The Kyle and Jackie O Show. She continued, "'You are very poor. You have nothing. Mommy and Daddy have a bank account.'"

Here are a few more times when she kept it real:

"Last year when we celebrated Christmas, Wyatt was 2, and it was too much," she told Entertainment Tonight. "We didn't give her anything—it was the grandparents. The kid no longer appreciates the one gift. They don't even know what they're expecting; they're just expecting stuff. We've told our parents, 'We're begging you—if you have to give her something, pick one gift. Otherwise, we'd like to take a charitable donation to the children's hospital or a pet [or] whatever you want."

On a two-hour road trip to visit Kutcher on set, Kunis told Babble,

She was being really quiet, and I was like, 'Oh, let me look in the rearview mirror to make sure everything's okay. And I look, and she's happy as can be, but just not nearly strapped in. I was like, oh, f*ck me. And I'm on the 101, and she's just like blah, like fine in her car seat, nothing, no strap whatsoever. And I think I just turned white.

Kunis felt terrible about it, but a year later, Kutcher made the same mistake, which proves that nobody's perfect.

"I think if [Wyatt] killed someone, I would literally be like, 'I got it; where do you want me to help you bury the body?'" she told Business Insider. "I wouldn't even question it, and I can't say that about anybody else in my life."

"The only thing I've ever felt guilty about, and I actually apologized to my 3-year-old, is when I overreact," she told People. "I'll walk away, and I'll come back, and I'll sit her down and I'm like, 'I'm really sorry. Mommy overreacted. Do you forgive me?' And she's like, 'Yeah, I forgive you.' Whether she understands what just happened or not, I want her to know that I'm as flawed as she is."

When asked during an E! interview what her kids did to annoy her, Kunis came up empty, which she attributes to her kids' ages. "My not-even-1-year-old, he's a lump of meat. Like, I love him, but he's, you know, 10 months old."

Even if your kid turns out awesome, though, don't pat yourself on the back too much. "Another important thing to learn is that kids have a personality that has nothing to do with you," Kunis told Glamour. "I have a really sweet daughter. She wants to hug all the other kids. I didn't teach her to be sweet. It has nothing to do with me. I've realized you can control only so much."