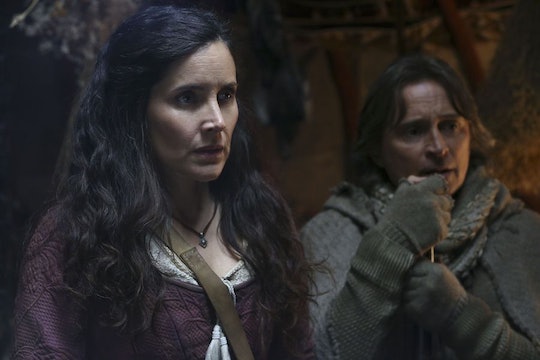 Milah Returns To 'Once Upon A Time,' Although Not For Long

Milah's appearance on this episode struck a few chords for fans. First of all, Milah is an unapologetic woman. She has regrets from her past, but she is doing her best, just like she did when she was younger (and alive). In a flashback, we see her marriage with Rumple struggling, we see her meet Hook at a bar, and finally we see her as a fiercely protective mother.

In the flashback, we certainly learn why Milah and Rumple didn't work out. In order to acquire a cure for Baelfire, Rumple promised to give away his second child, which Milah was less than thrilled with, for obvious reasons. It seems to be what eventually drove her into Hook's arms, since after she learned about the deal Rumple made, she went to the bar that she met Hook at.

Of course, it wouldn't be a Rumple and Milah reunion without a little Emma thrown in there. In one of the best lines of the episode, Milah points out that Emma has been with her former lover and her son (Neal Cassidy). As Rumple says, I'm sure there will come a day where the three of them will be able to laugh at that really awkward situation, but until then, I think we can all laugh for them.

While saving Hook — which is why Rumple recruited Milah in the first place — Rumple had a face-to-face meeting with Hades where he was essentially forced to push Milah into the River of Lost Souls. It was shocking because this is technically the second time Rumple has ended Milah. When she first died, it was when she told Rumple that she didn't love him and that she loved Hook. Then, he crushed her heart to ash, as one does on Once Upon a Time.

It's kind of unfortunate that this is the last we'll see of Milah — probably — considering she's just a floating orb in the River of Lost Souls. Although, it's honestly the last of their problems, as it seems the group is stuck in the Underworld now that they can no longer use Emma's heart to leave.