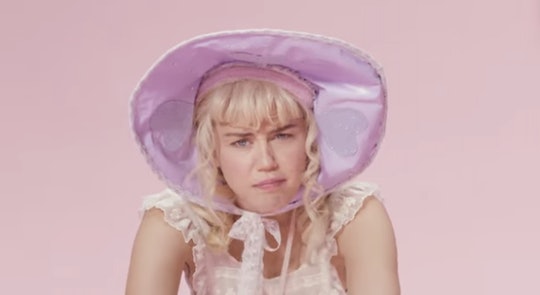 Miley Cyrus Dresses Like A Big Baby For Her "BB Talk" Video, But What Does It All Mean?

Miley Cyrus never disappoints, but Miley Cyrus dressed as a baby is simply fascinating. And weird. But if you figure out how to stop watching, please let me know. Cyrus' new video for "BB Talk" has the pop star rolling around in a onesie, sucking on a bottle, and dancing in totally bananas hoop doll outfits. As she does.

The half spoken, half sung single off the album Miley Cyrus & Her Dead Petz is about, well, baby talk, of course. Or the infantilization of women. Or something. Really, listening to the lyrics, it's about a too nice dude ruining the moment with his PDA and "goo," showcasing just how awful baby talk is.

So the video, directed by MC and Diamond Martel, may be an empowering message about how pop stars are treated and baby-fied, according to some. But after watching the video like five times (a job only for the brave), it seems to me that the video is just Miley being Miley, everyone. If you take the lyrics for what they are and match it all up to the aesthetic and styling, it's just Cyrus dressed as a hot baby talking about dudes who go all mushy.

Right? It's true that culture does infantilize some pop stars, but it's more a really exaggerated way to show just awkward it can be when certain types of dudes think girls need to be coddled and cared for. It's cool if you're into that sort of thing, but women like Cyrus don't want or need that. She just wants to do dirty things to his bottle, if you know what I mean.

The bottom line is that Cyrus is yet again proving herself to be absolutely amazing. She's provocative, smart, and uber talented. Let her roll around in that diaper and read anything you want into it. Just don't make me watch it again.