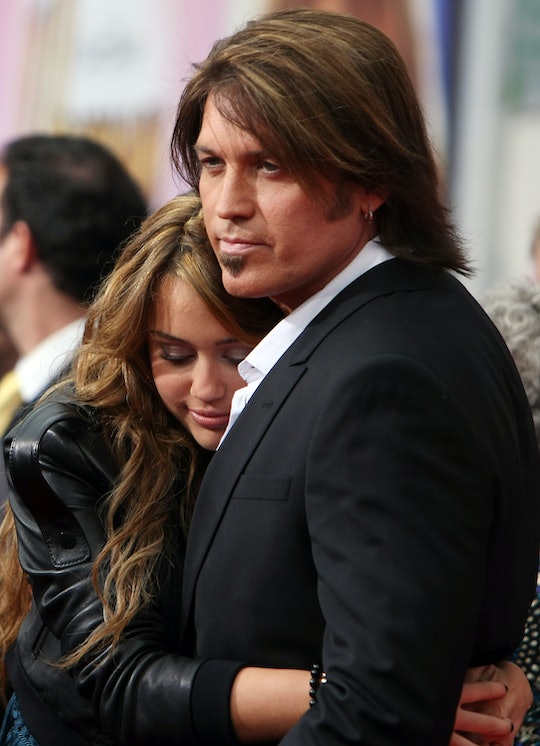 As everyone put the finishing touches on their glitz and glam, Miley Cyrus shared the sweetest Grammys throwback photo with her dad, Billy Ray Cyrus. On Sunday, Feb. 10, loads of celebs made their way to the 61st annual Grammy Awards red carpet, and ahead of her debut, the 26-year-old singer made sure to give her equally talented and famous father an adorable shout out on Instagram and Facebook.

"On our way to the Grammys like..." Miley captioned the old photo with her singer-songwriter dad from what looks like at least 10 to 15 years ago. In the sweet shot, The Last Song star is smiling from ear to ear sitting in on her dad's lap, while Billy Ray is rocking a mean mullet (because '90s...).

Within hours of posting the sweet throwback pic, fans flooded the comments section on Facebook awing over the photo. "How adorable! Rooting for you today girl!" one fan wrote, while another commented, "Precious!"

Along with artists like Maren Morris, Red Hot Chili Peppers, Post Malone, Cardi B, and Katy Perry, the Hannah Montana alum is performing at the 2019 Grammy Awards, according to E! News. And when Miley takes the stage on Sunday night, let's all hope the cameras pan over to where her dad is sitting to capture his proud reaction.

Ahead of Sunday night, Billy Ray — who first "found global fame" with his single, "Achy Breaky Heart" in 1992, according to E! News — also took to Instagram over the weekend to share a few sweet snaps with his daughter. On Saturday, the proud papa shared a photo of him and Miley "celebratin'" Dolly Parton, who happens to be Miley's godmother, according to Country Living, and this year's Person of the Year at the Grammys.

"What a night! Congratulations @dollyparton! We had so much fun celebratin' you! And @mileycyrus! Wow! What a performance of #IslandsInTheStream with you, @shawnmendes, and @iammarkronson! Absolutely beautiful #ProudDad," he captioned the photo of himself sitting next to Miley.

For those who've been following the pop star since her Hannah Montana and Disney days, fans know that Miley's relationship with her dad is especially sweet. During her childhood, Billy Ray would often bring Miley on stage and on tour with him, and they'd often sing together. In fact, during a 2017 interview with Rolling Stone, Miley told the publication, "I grew up being surrounded by my dad's music," and that he's inspired her newest music.

More recently, Miley and her dad made fans crumble when they performed "Achy Breaky Heart" together in 2017, according to Taste of Country.

And outside of their respective music careers, Billy Ray gave his daughter away at her December wedding when she married her now-husband Liam Hemsworth in a low-key ceremony, according to E! News, and posed for the most heartwarming photo together that was later shared on Instagram by Miley's mom Tish Cyrus.

Between all of the gowns and glamour, it's so sweet to see a photo like Miley's to help remember these talented celebs' roots and, of course, to warm up all our hearts.