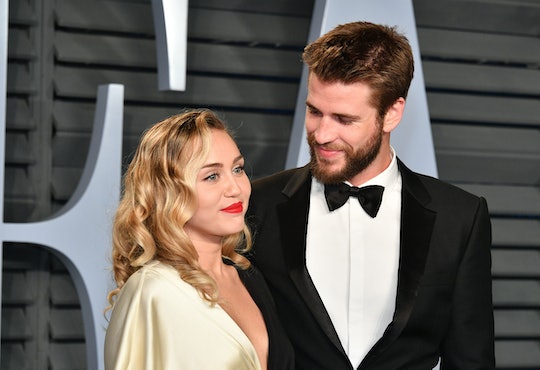 Miley Cyrus Is Not Here For The Pregnancy Rumors

There are so few things that society loves to police women on other than marriages and childrearing timelines (save for, perhaps, their appearances, which is a topic for another day). Celebrities seem particularly prone to dealing with the barrage of speculation, which is why Miley Cyrus has responded to the ongoing pregnancy rumors after her wedding, and to be honest, it's a really solid reminder that it's time to leave people alone about this.

After tying the knot with Liam Hemsworth late last year, whom she has been in a relationship with on-and-off for a decade (save for, of course, their split in 2013 that produced such iconic art as the song "Wrecking Ball") the couple has faced an unending stream of speculation that the "unexpected" wedding was actually due to, well, something else that was unexpected.

However, those rumors are completely unfounded, and Cyrus shut them down in a series of now deleted tweets. “I’m not ‘Egg-xpecting’ but it’s ‘Egg-celent’ to hear everyone is so ‘Happy For Us,’” Us Weekly reported she wrote. For those who haven't been keeping up with pop culture, Kylie Jenner recently lost the title of "most liked photo on Instagram" to a random photo of an egg, which is likely what Cyrus is referring to. “We’re happy for us too! ‘Egg-cited’ for this next chapter in our lives …. Now, can everyone leave me alone and go back to staring at an egg.”

On Dec. 26, Cyrus uploaded photos of her at-home wedding to Hemsworth on Instagram, CNN reported. Their close family and friends were in attendance.

However, it's not the only sweet sentiment that Cyrus has shared of her new hubby in recent history. Just a few days ago, she posted a tribute to his 29th birthday, sharing some of the details of their almost unbelievably adorable relationship.

"L, HBD to my #1… When we met you were 19, Today, you are 29… I thought I could share some of my favorite things about my favorite dude in honors of this very special day," People reported she began on Instagram.

“The way you look at your family. Your friends... at strangers... at life... The way you look at the ocean and the way you always take your time. The way you go outside when I ask ‘what’s the weather like?’ instead of checking your phone… I love laying in bed late at night looking for new recipes, only going to sleep so we can wake up and make breakfast together while having a hot cup of coffee. (also as hot as you are) I love those little lines around your eyes when you laugh or look into the sun… I love the way we speak in our own language. Sometimes with just a look.”

During an interview with Sirius XM, Cyrus explained why she believes that their breakup was actually necessary to the long-term health of their relationship.

"I had to. I don’t like when relationships are two halves trying to make a whole. That's when someone's like, it's that, 'I can't eat, I can't sleep'. Well, that's because you're so used to depending on someone else," she said. "So, I don’t think that I have that co-dependency. I'm super stoked to have a normal [relationship]."

I think people that break up and get back together, that’s awesome. You get time to be yourself. You get time to grow up. I think if you’re growing up attached to another person, you never really get solid as your own being.

Though it seems that the couple is happier and more stable than ever, they could honestly do without the constant barrage of pregnancy rumors. Women's lives do not circulate around their maternal status, and it's time to stop presuming that they do. Instead, we can be happy for Cyrus and Hemsworth, because they are a family as it is — full stop.