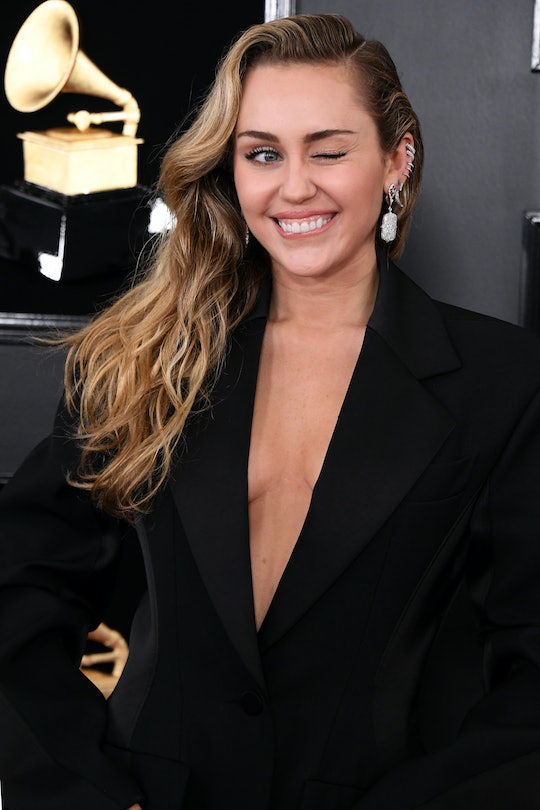 Every awards show red carpet doubles as a fashion show, but the Grammys is definitely one of the most highly-anticipated of them all. That's why it was no surprise to see Miley Cyrus in a red carpet look that was, honestly, so Miley. But what else would you expect from the always fashion-forward star?

Flanked by her dad Billy Ray Cyrus (looking very rock star-esque himself) and her mom Trish, the 26-year-old turned heads in a stunning black suit from Saint Lauren, according to E! News... with nothing underneath the blazer. Because, hello, have you met Miley before? That's how the girl rolls, and more power to her! But just because Miley was in a suit doesn't mean she was in business mode: Besides the no-shirt thing, her blonde beach waves and diamond statement earrings turned up the voltage big time.

Isn't it amazing how Miley really, really looks like a perfect mix of her parents? She's got her mom's eyes for sure, but she's got Billy's... hmm, I'm not sure what, actually. (I'm going to go ahead and say face shape, because I think I used to think that before Billy had a beard.) I'd bet anything these three coordinated their outfits ahead of time, too, and there's a fun mix of styles the trio is rocking. It's basically a family business for these guys, posing for the paps: Cyrus has been doing the Grammys thing since birth, pretty much (or even before, in a way, if you look at it from a DNA perspective). She's red carpet royalty, and she absolutely knows what she's doing.

Take last year, for example, when she made headlines in both a black velvet jumpsuit from Jean–Paul Gaultier and a fairy tale-worthy red ball gown from Zac Posen, as E! Online reported (not to mention the killer rhinestone outfit she wore for her duet of "The Bitch Is Back" with Elton John). This is a girl who can wear herself some outfits, y'all.

Of course, if you're a big Miley fan, which you definitely are, you might be more concerned about the fact that she showed up with her parents instead of her husband, Liam Hemsworth. It's kind of like awards ceremonies (like the Grammys) serve as a rare glimpse into celeb relationships: They're together, in public, live and on camera. That's why when one half of a famous pair shows up on a red carpet solo, the rumors start immediately: OMG, did something happen?

But honestly, it probably means nothing at all. As Elite Daily pointed out, the pair is pretty private to begin with, and Hemsworth didn't go to the Grammys last year, even though then-fiancée Cyrus performed a duet of 'Tiny Dancer" with Elton John. And between then and now, the couple got married, so clearly there was no trouble brewing in paradise last time this happened.

It is too bad that Hemsworth wasn't there to see his wife looking like absolute fire in that black suit, though. (And those shoes!)