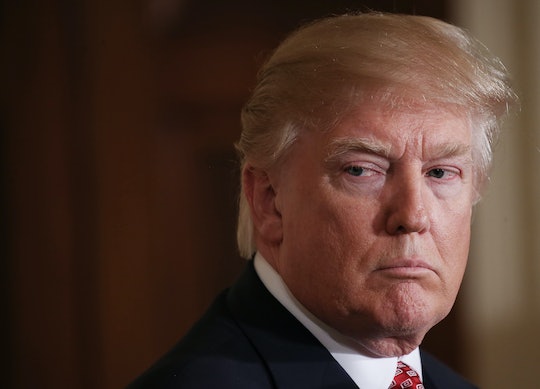 Remember when President Donald Trump convinced Americans that Hillary Clinton was a security risk? Over the weekend, Trump held an open-air, impromptu national security meeting at Mar-a-Lago in full view of paying patrons, and those patrons excitedly took photos. One even posted a picture showing the aide who carries the nuclear codes when the president is away from the White House, so now everyone knows what he looks like. But her emails!

Trump and Japanese Prime Minister Shinzō Abe were dining at Trump's private club in Florida, in full view of club guests (whose annual Mar-a-Lago dues run $14,000 after a joining fee of $200,000), when they reportedly got the news that North Korea had test-fired a nuclear missile. They immediately began conferring right out there in public, with staffers reportedly using their cell phones to illuminate private documents, within hearing range of the guests.

One Mar-a-Lago guest, Richard DeAgazio, documented the situation on his Facebook, posting photos and description of the meeting, writing, "Wow...the center of the action!!!"

But that wasn't all DeAgazio decided to share. He also took a picture with one particular aide who was nearby, and introduced him to the Facebook sphere as Rick, who "carries the 'football.'" Football, huh? Sounds harmless. Sports! Oh, wait.

The nuclear football (also known as the atomic football, the President's emergency satchel, the Presidential Emergency Satchel, the button, the black box, or just the football) is a briefcase, the contents of which are to be used by the President of the United States to authorize a nuclear attack while away from fixed command centers, such as the White House Situation Room. It functions as a mobile hub in the strategic defense system of the United States. It is held by an aide-de-camp. and Rick is the Man.

The fact that the nuclear football exists is not classified. In fact, DeAgazio told The Washington Post that he looked up all the information about it on Wikipedia, rather than hearing it from the military members on the dining terrace with him. But knowing it exists is one thing. Having someone who pays a lot of money to belong to the president's private club posting a fun Facebook picture of the man who carries it (especially in the "cool, look at my access!" tone DeAgazio used) seems like something else entirely.

In fact, as Daily Beast editor Scott Bixby pointed out on Twitter, Joe Biden once said that the aide holding the nuclear football was in the same room as him at a rally, and Breitbart was not happy about it. So far, the right-wing site has said nothing about this development.

As BuzzFeed noted after talking to a senior defense official, posting a picture of the nuclear football guy isn't illegal, or a security breach, but it is "bad form," and probably not so smart.

It sure is fun trying to sleep at night nowadays!