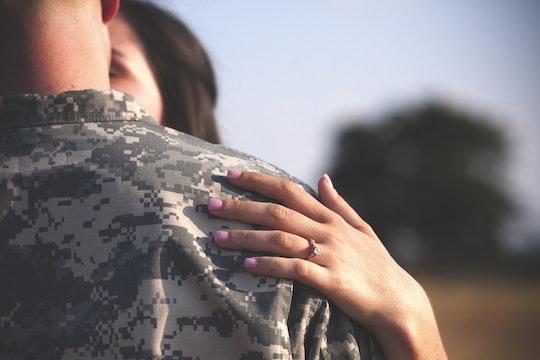 Military Partners May Have A Higher Risk Of Perinatal Depression, Study Finds

The stress and mental toll of coping with your partner being deployed or in some way active in the military is almost impossible to understand unless you have been through it. But what's even worse is going through pregnancy, childbirth, and the earliest stages of parenthood without them. Military partners may have a higher risk of perinatal depression as compared to other expecting and new moms, new research finds, and honestly, it makes sense.

The study, which was published by the Journal of the Royal Army Medical Corps, explained that women who are in the perinatal stage of pregnancy, which the World Health Organization defines as "22 completed weeks (154 days) of gestation" to "seven days after a completed birth," and whose partners are members of the military may actually have a higher risk of mental health issues than other mothers.

Though researchers from Anglia Ruskin University's Veterans and Families Institute for Military Social Research (VFI) reported that all pregnant military partners reported more depressive symptoms "at all stages of their pregnancy and all stages of their partner's deployment cycle," it seems to peak right before childbirth, as well as in the days immediately afterwards. It's theorized that this is due to social isolation, anxiety about childbirth, and the daunting feeling of becoming a new parent on your own.

The reality is that women who are pregnant are not only dealing with the stresses of having a partner in ongoing dangerous — if not at times life-threatening — situations, but also the idea that they are on their own to manage childbirth and early parenting.

Dr. Lauren Godier-McBard, the lead author of the study, explained it like this, as per Science Daily: "Women who have a serving partner in the military not only have to deal with pregnancy and the additional demands this places on their mental health, but they may also be very worried about the welfare of their partner — in addition, they are lacking that essential support while their spouse is away."

She continued to explain that for military spouses, social support is essential for remaining proactive:

She also noted that while the study focused primarily on research concerning U.S. citizens, there are "cultural and situational similarities" between other nations, like the UK, which would make this just as applicable there as it does in the case of American military families.

Though it might seem daunting at first, there are a lot of resources for military wives and partners who are getting ready to have children while their partners are away.

There are a lot of resources online that can help with this. While some suggest making a plan for your other kids when you go into labor, others say to make sure you make time for birthing classes and support groups, and others yet say to make sure you're taking advantage of all the resources available to you, such as services that provide military mothers-to-be with baby showers and other things that they need.

Though it is challenging, it is important to remember that you are not alone. As always, it's best to consult a mental health professional if your symptoms begin to interfere with your daily functioning.