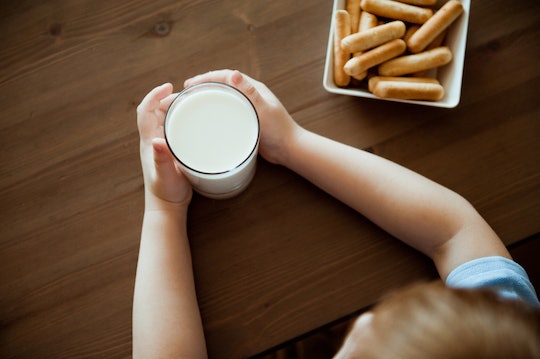 Milk allergies doesn't refer to general sensitivities, like lactose intolerance. When you don't have enough of the enzyme lactase, which breaks down the sugar in dairy products, you may be diagnosed with lactose intolerance. As outlined by Everyday Health, however, a milk allergy is an actual allergy to the protein that's in milk, which results in an allergic reaction when you eat or drink it.

There's also a difference in when milk allergies or lactose intolerance may develop. "Milk allergy usually shows up early in life," Dr. Amy E. Barto, a gastroenterologist, told Everyday Health. "Lactose intolerance is more common, takes longer to develop, and can occur at any time of life."

In general, lactose intolerance is less severe than milk allergies. Food sensitivities and intolerances aren't associated with the immune system like food allergies are, which is why allergic reactions can be so scary and dangerous. Knowing this difference is important so that people can take milk allergies seriously because, according to new research, they're actually really common.

In a new study published in the Annals of Allergy, Asthma & Immunology, researchers worked with 53,575 parents with children from October 2015 to September 2016. They worked to gather survey information about demographics, symptoms, the severity of those symptoms, diagnosis, and baked milk intolerance to take a closer look at milk allergies in kids.

They found that, amongst kids with food allergies, half of kids under one developed a milk allergy. Overall, about 2 percent of children under the age of five have a milk allergy in the United States, according to the study.

That may not seem like a lot, but FARE noted that milk is one of the eight major allergens in kids, alongside eggs, peanuts, tree nuts, wheat, soy, fish, and shellfish. And allergies related to sesame are becoming increasingly scrutinized. Like these other allergies, milk allergies can have severe and even life-threatening consequences.

The study's author, Dr. Ruchi Gupta, said, according to the American College of Allergy, Asthma, and Immunology:

“We know confusion exists over what a real milk allergy looks like ... It’s important that any child suspected of having a milk allergy have the allergy confirmed with an allergist. A food allergy of any kind can have a big effect on a household, including food costs and quality of life. A child with a milk allergy should receive counseling on how to avoid milk, but also on what it means to unnecessarily cut out foods. You don’t want to get rid of necessary nutrients.”

The study also found that only 26 percent of children with milk allergies have a current epinephrine auto-injector prescription, which makes it the lowest reported rate among the top food allergies, according to the ACAAI. That's concerning, because using one can make a big difference in the event of an allergic reaction.

Also known as EpiPens, these devices are incredibly important for anyone who may experience anaphylactic shock. According to WebMD, anaphylaxis is a severe food reaction with symptoms ranging from hives and rashes to a swollen throat, vomiting, and more.

“Parents need to make sure they have an epinephrine auto-injector available and should talk to their child’s allergist if they have any questions,” Dr. Gupta said, as reported by the ACAAI. There is, however, currently a shortage of EpiPens, which may make it difficult for some patients to get ahold of the auto-injectors that they need. In response, the FDA extended the expiration dates for some lots of EpiPens, so you may want to check the dates if you have one at home.

Being aware of food allergies is incredibly important. Milk allergies may not be the first thing people think of when it comes to kids but, as this study shows, they may be more common than you thought.

More Like This
What Is RSV?
New Report Shows 80% Of Pregnancy-Related Deaths Are Preventable
Prince George Reportedly Got Sassy In A Fight With A Classmate
Endometriosis & Your Sex Life