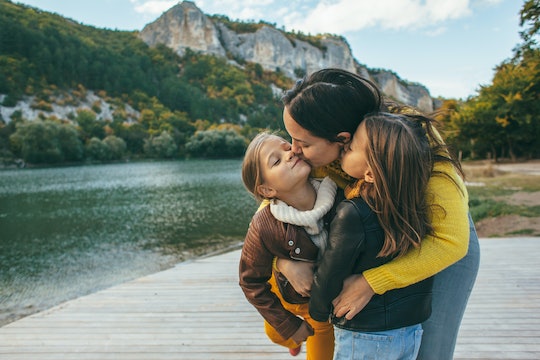 Millennial Moms Want Bigger Families, But They Can't Afford It

That picture of a young woman in high-waisted jeans toting a baby on her hip isn’t just a stereotype. Most new moms today are millennials — at least 82 percent of them, according to Pew. And while more than a million millennials are joining the baby brigade each year, it’s hard to predict what their families will ultimately look like compared to previous generations. Many millennials would like bigger families… but say they cannot afford them.

Here’s what we do know: Women are spending more time in the labor force, they’re having children later in life, and about one in four are raising kids on their own. Oh, and childcare costs are astronomical. They’ve nearly doubled in the last 25 years, according to the U.S. Census Bureau. A poll of 2,000 women by the Upshot found 64 percent of respondents cited the expense of childcare as a reason for having fewer children.

With that in mind, it’s no surprise that many women are taking a practical approach to family-planning, limiting themselves to only the kids they know they can afford — even if they wish they could have more.

Financial advisor Christin R. Bonomonte confirms that many millennial families are basing their decisions around whether to have kids, and how many to have, on their financial situation. And we may have the economy to thank for it.

“Our country experienced the largest recession in over 75 years just as these young adults were beginning to enter the workforce,” Bonomonte tells Romper. “The difficulty in securing jobs in their career fields upon graduating, and watching their parents have to push off retirement, or make other hard financial decisions because of the impact to their savings, was a life lesson that shaped their attitudes toward future planning.”

Bonomonte notes that potential parents should plan for pregnancy- and birth-related medical bills averaging about $8,000, plus an increased cost of living of $12,000 to $16,000 annually until each child turns 18. Most parents also want to help pay for higher education, weddings, cars, and so on. The numbers add up quickly, and that’s keeping some millennials from having the bigger families they want.

We’re meeting our bills, but unable to get ahead of anything before, say, the car breaks down and wipes out our small savings, or one of the kids lands in the ER for stitches.

“You might laugh, but we’ve talked about as many as eight kids!” Elizabeth Steinmetz, a Philadelphia-based freelance writer and stationery designer, tells Romper. Steinmetz is married to a graphic designer and has three kids, but says they both want more. “No, we’re not in a cult, I promise! I’ve just always loved the idea of a house full of muddy knees and fruit punch mustaches, raucous holidays, piles of bunk beds.”

Steinmetz and her husband have frequently discussed having more kids or becoming foster parents, but their combined income doesn’t count for much in the face of student loans, medical bills, and debt they accumulated over several years of unemployment. She works from home while caring for the kids because her teacher’s salary couldn’t cover the cost of childcare. “We’re meeting our bills, but unable to get ahead of anything before, say, the car breaks down and wipes out our small savings, or one of the kids lands in the ER for stitches,” she says.

The family of five currently lives in a two-bedroom apartment, and they’re quickly running out of space as the children grow. “The goal has always been to eventually buy a house, but now we’re facing the reality that it may not be financially feasible for a very long time,” she says. “We know that we can’t fit any more kids in here, and we realized that if we can’t buy a house soon, we’re going to quickly eclipse the comfortable window for having another kid.”

Housing costs were also a big factor for Chicago-based marketing communications professional Brandy Gonsoulin. She and her partner, a creative director for an agency, are in the process of selling his house and moving to a cheaper neighborhood in order to reduce expenses.

“I would highly recommend that Chicago is not a place to just throw caution to the wind when it comes to family planning,” Gonsoulin says. “Trying to get a single family home at a reasonable price is insane. We have realized that the whole American dream is not attainable in certain markets and have to make adjustments.”

At 36, Gonsoulin would prefer to have a second child sooner rather than later, but she just doesn’t know if they could manage it financially, especially because of childcare costs. “I’m not opposed to staying at home if I had to, should a second child make this equation impossible, but I would be incredibly unhappy with it, so that’s also impacting if we have more,” she says.

Gonsoulin and her partner have talked about the possibility of her staying at home, with him remaining the sole breadwinner — but it’s not a conversation she’s comfortable with. “The fact that I am planning a family when I am creeping up to my highest salary is in conflict and has huge impacts to our total quality of life,” she says. “The ‘you can have it all’ fallacy is leading to a lot of challenges for family balance, while gender roles still need to catch up. Women still do most of the mental load work/housework but are really mad about it, so I think that’s likely leading women to either not have family are stay small.”

Being a transplant in a large metropolitan area without a family support system has also been a challenge, Gonsoulin says. “There’s no village. Daycare is our village and we have to pay for that. So, I don’t think a family like mine is looking at, ‘how big do we want our family to be?’ It’s more about, ‘What’s going to make sense for our collective quality of life?’ which I think is also something that is unique to this generation.

“Both partners usually have a sense of autonomy and they want to keep it when, perhaps, our parents didn’t think they could have autonomy while raising a family. It makes the whole balance very different.”

We have thought about fostering (and if it leads that way, adopting) because we would at least, potentially, be able to skip the financial burden of pregnancy healthcare, delivery costs, and newborn costs.

For Sandy Swagger Jones, a photographer and mother of two, just the potential costs of giving birth have held her back from having more kids. She and her husband both dreamed of having four children, but complications in her second pregnancy left the family with costly medical bills.

“My husband would love more kids, but he understands my fears of having another health-related issue,” Jones says. “We are on the same page as far as not feeling like we could afford another pregnancy, or at least another maternity leave. We have thought about fostering (and if it leads that way, adopting) because we would at least, potentially, be able to skip the financial burden of pregnancy healthcare, delivery costs, and newborn costs.”

While millennial moms face some serious financial challenges, Bonomonte says that careful planning may help families reach their goals — whatever they may be. “There are many strategies to help parents build a plan to support these needs,” she says. “The single most impactful component to this plan is time. So start planning now.”