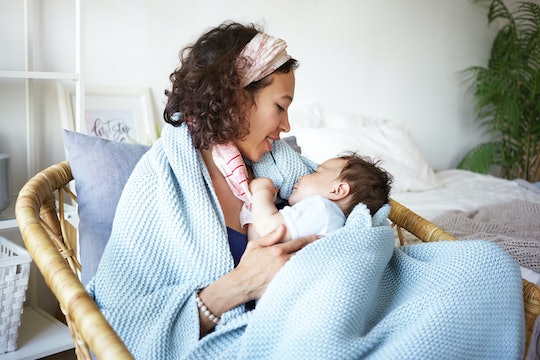 When it comes to bedtime, lullabies have long held their spot as a staple of most families' routines. But, according to new research, millennial parents are ditching this bedtime ritual, as The Telegraph reported. Now, if you didn't grow up on lullabies, these findings may not seem like a big deal. But, there are a few reasons to look into bringing these sweet little ditties back.

Most of us can easily name off some popular baby lullabies, from classics like "Twinkle Twinkle Little Star" to "Hush Little Baby." For many you heard those lullabies almost every night from your own parents; but, for some, lullabies were something you perhaps picked up in school and didn't necessarily bring home.

In a new poll commissioned by the Lullaby Trust, and published in the journal Psychology of Music, parents revealed that just over a third of them sing lullabies to children aged under 5, as reported by The Telegraph. According to the publication, about 70 percent of parents who still use lullabies are over 45 years old, which suggests that the practice is losing popularity with younger parents, though it's not clear why.

Millennials catch a lot of flack, so this may seem like another case of people looking to put them down. But lullabies do have a purpose, and if they're not a staple at bedtime in your home, you may want to consider using them.

Lullabies have been found to help relieve kids' pain and lower their heart rate, according to Medical Daily. For instance, in 2013, researchers from Great Ormon Street Hospital conducted a study that found not only did lullabies help reduce kids' anxiety and pain, but the same group of kids experienced lower levels of those benefits when they just had stories read to them. Nick Pickett, music specialist at GOSH, explained to Medical Daily: "Parents have been singing to their children for thousands of years and they have always instinctively known that it helps their children to relax, but it's exciting to have scientific evidence that lullabies offer genuine health benefits for children."

The benefit of music with kids has been noted before; it's entertainment but, as reported by NPR, using music with kids may promote helpfulness (the clean up song, anybody?) and helps foster bonding moments between parent and child.

There's no need for millennials to stress over singing the same old lullabies as everyone else. If you're tired of them and want to switch things up a bit, there are plenty of options. For instance, millennials who grew up on Disney can make some of their favorite hits into lullabies, as suggested by Pure Fandom. C'mon, what kid wouldn't be calmed hearing a little bit of The Lion King's "Can You Feel The Love Tonight"?

What's really important, though, is making sure to somehow implement music into your kids' daily lives. Laura Jane-Foley, an ambassador for the Lullaby Trust, said of the research, according to The Telegraph, "The musical three R’s of rhythm, rhyming and repetition are crucial to a child’s mental and emotional development. And, by participating in the shared activity of singing, parents are strengthening the bonds between parent and child.”

So, sit down and maybe even invent some new lullabies with your kids. You don't have to be a certified rockstar for them to love it!