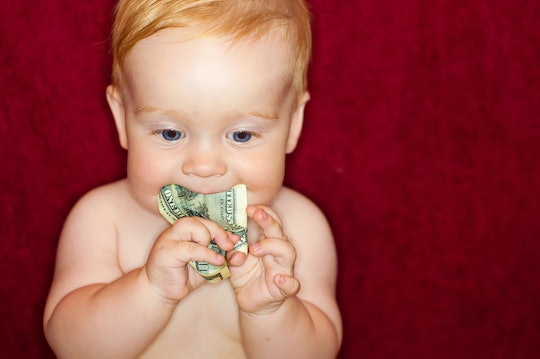 Millennial Parents Are Making This Major Mistake With Their Money

It's not really a secret that managing money is an important life skill, and one that is far from easy to accomplish. Honestly, it could take years for someone to fully understand how to budget for their expenses, learn the ins and outs of investing, and what it even means to be "in debt." But, life is all about lessons, and figuring out how to handle money is an important part of growing up, despite the many ups and downs along the way. Now, though, experts are saying that millennial parents are making this big mistake with their money. And no, it has nothing to do with avocado toast.

A new survey from Personal Capital has found that "70 percent of Millennial parents vs. 48 percent of parents overall say they would prioritize saving for their child’s college education over their retirement," something that financial experts warn is a huge mistake.

Speaking to CNBC, certified financial planner Carrie Schwab-Pomerantz said that prioritizing your children's education may seem important, but there are other options. You really shouldn't "derail your retirement for your child's college education when they can get a loan or scholarships," she told CNBC. And, unfortunately, there's still more to it than that.

Basically, if parents don't save up enough for their own retirement, their kids could end up with the burden of taking care of them later in life, which Schwab-Pomerantz says could end up costing more than student loans in the long run. And, while some may think it's selfish to put their own retirement over their child's college education, there are a few things to remember.

First, your child could end up getting a great scholarship, and not even needing those funds. Secondly, you can borrow funds and take out loans for college; you can't do the same for retirement. Third, and perhaps most importantly, "there's no guarantee the kids will take care of them financially or otherwise in their old age," Lazetta Braxton, CFP and founder and CEO of Financial Fountains told CNBC. And truly, there's nothing selfish about ensuring that you'll be able to take care of yourself.

Almost all Millennial parents, (95 percent) say they will help pay for their child’s graduate school education, and 60 percent say they will pay $100,000 or more — which makes them more than twice as likely as parents overall.

But, according to financial experts, it's the college spending that could end up costing millennial parents big time. So, what should parents do? "Be upfront with your kids about how much you can realistically contribute towards college, even if the amount may disappoint them," Braxton told CNBC.

Children will be motivated to work toward figuring out their own way to pay for college. And they will especially appreciate their parents saving for retirement in the future when they won't be burdened with that financial responsibility as their adult lives are just getting started.