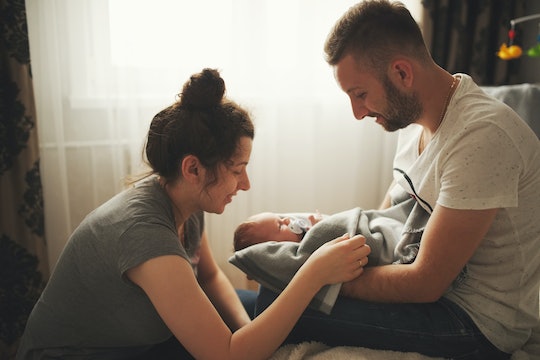 Once upon a time, you might have named your beautiful new bundle of joy after a favorite aunt or grandparent (sometimes you had such family pressure, you had absolutely no choice) and that was the end of it. Felix or Bernice was just stuck the rest of their natural-born lives. Nowadays, however, it seems that the criteria for how parents-to-be pick their baby's monikers has radically changed. In fact, Millennial parents are picking their baby's names based on a fascinating reason you might not have guessed, as new research shows, and I have to say, the findings are kind of surprising.

According to a new research survey — which was conducted by a company named OnePoll on behalf of domain-name giant GoDaddy.com — as many as one in five millennial parents (that's 20 percent) said they changed, or seriously considered changing, their baby's name based on what domain names were free at the time. The study, which sought to examine how the internet is shaping approaches to parenting, shows a generational split, as explained by the New York Post.

As such, the younger parents said, according to the research, that the ability to create a personalized website for their child was important in terms of future job searches and college application purposes. Some parents (37 percent overall) believed personal websites will someday replace social media, and wanted to create a child's website with this in mind, as the study found.

“It’s no longer enough to make sure that your baby is enrolled at the top elementary school at birth," noted Melissa Schneider, a trends expert at GoDaddy, according to The Independent. “Parents today are claiming their child’s name and online identity to make sure that they’re set up for success down the line."

The survey results point to a shift toward owning your identity online. When asked about their digital footprints, Millennials were nearly twice as likely (29 percent of them total) to have their own domain or website vs. 17 percent of Gen X-ers doing the same. “The internet is where so much of life happens, and we’re seeing parents in today’s world make sure their kids have a place for themselves online,” Schneider explained in a press release for the study. “We expect to see registering for a domain become as common as registering for a stroller for new parents.”

Personally, I really find this surprising, because having a baby involves so many things, and for some of us, thinking about an unborn baby's online "marketing" was just not on the post-baby shower, pre-hospital-bag-packing checklist. But it also makes sense if you really think about it, since the future will clearly be an automated, digital one, in which parents will have to teach their kids online safety just as much as they will have to impart the rules of crossing at the crosswalk. And that's one thing the study says that both Millennials and X-ers agreed on: 94 percent of all survey respondents reported that they plan to speak to their children about how to responsibly maintain an online presence. And in today's world, that's a priority all parents can recognize.

More Like This
Can The Baby Have That?
The Covid Vaccine For Kids Under 5 Has Been Sent To The FDA For Review
Why Babies Love Water, According To Experts
The Best Toys For 3-Month-Olds