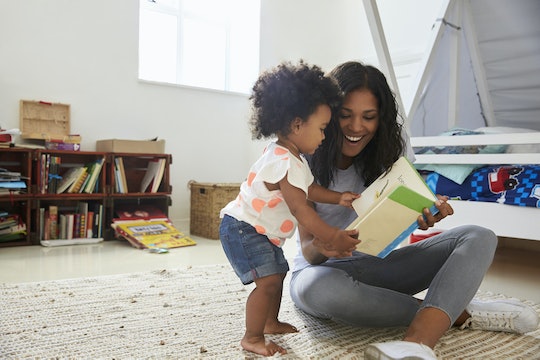 "V Is For Vulva": How Millennial Parents Are Teaching Their Kids About Their Body Parts

Down there. You-know-what. P. V. And who can forget the completely unironic heyday of va-jay-jay? How often do we hedge on using the proper terms for genitalia out of a misplaced sense of propriety or embarrassment? Or worse, ignorance? For many of us, there was a certain point during childhood during which some words were either kept from us altogether, or shortly after learning them, shoved into a dark closet under the guise of maintaining a clean vocabulary. Like curse words, vagina and testicles and uterus weren’t to be uttered out loud, much less in public; accurate though they might be, the societal discomfort they evoked was too much to bear. And so the pattern continues, with children intuiting from their parent’s caginess on certain topics that some body parts are acceptable to speak about, and others, not so much.

Fortunately, a new generation of millennial parents are committing themselves to breaking the cycle of silence and shame that can cripple their children’s self-knowledge and future sexual well-being. Across the country, little children are happily singing about vaginas and penises, and scribbling vulvas on their stick figures. In fact, "vulva" in particular has become a catchcry and signifier for female positivity, with thousands of posts nested under #vulvaart, #vulvalove, and #vulvapower on Instagram.

Can you remember your introduction to sexual education without cringing? I can’t. I was in fourth grade, and the boys were taken to another classroom while the girls stayed behind to watch a video series titled “Growing Up and Liking It.” There was a grainy, awkward montage that featured a mother making pancakes for her daughter and two friends as she explained the process of menstruation. The pancakes, it was soon revealed, were a perfect rendering of the female reproductive system. Years later, I cannot erase the image of those buttery, golden-brown Fallopian tubes from my mind.

Adolescent sexual education carries its own host of complexities, particularly now that we’ve already begun to reap the consequences of an era characterized by our reliance and addiction to social media. Children now possess entire worlds of information and the rapid ability to share it with others — however incomplete or inaccurate — within the palms of their hands. Researchers continue to appeal to lawmakers for comprehensive sexual education in middle and high school, as abstinence-only education has been proven time and again to be ineffective (as reflected in a study in the Journal of Adolescent Health). Until there are more trustworthy and beneficial systems in place, parents would do well to embrace sexual education far earlier than the teenage years.

But how early, exactly? It can be agonizing to come to terms with the fact that your precocious toddler is now big enough to ask for milk in the morning and put on their pants by themselves, much less express interest in body parts that are normally kept hidden. But therein lies the answer: when they begin to ask questions, that’s when they should be given answers.

Andrea Davidson, a licensed mental health counselor, elementary school counselor, and postpartum doula, doesn’t mince words: “I think it’s important from the very beginning as children learn language and begin labelling body parts — eyes, nose, arm, knees, vulva, penis,” she tells Romper. “Kids pick up on it when adults are uncomfortable talking about certain things, and this can lead to shame or ideas that parts of their bodies are ‘bad’ or ‘gross,’ and discourage them from bringing it up when they have questions or concerns.”

Sex educator Madison Young has also made introducing sex and body positivity a priority for her children from a very young age. You may have seen her singing a rather interesting remix of a popular children’s song in an installment of the Bravo series, "Extreme Guide to Parenting,” but in her household, eliminating this stigma is more normal than extreme.

“I use play, art, books and songs as ways to educate around our body, consent, gender and just help our kids get from one daily transition to the next,” Young tells Romper. “The song ‘Head, Shoulders, Uterus and Vulva’ was a way to normalize body parts that often get less focus than, say, knees and toes.” She adds, “It feels pretty awesome that my 18 month old can point to where on their body their uterus is.”

I’ll admit that hearing my daughter say the word 'vulva' at 22 months was jarring.

Committing to this progressive parenting ethos is great in theory, but many adults may find it more difficult to implement in reality. Childhoods that were rooted in sexual shame and fear, however happy in other aspects, can impart lasting effects well into adulthood, and eventually parenthood.

Therapist Jennifer Weeks, PhD, explains that parents who find themselves unable or unwilling to talk to their kids about sex usually fall into one or more of three categories: parents who don’t know enough about sex themselves, who assume that their child’s teachers will assume responsibility, or who are simply in denial. And certainly, it can be difficult to accept that your sweet, innocent child is growing into a fully realized person who will most likely develop sexual preferences and desire.

But Weeks cautions that letting this fact stop you from facing reality will only have more negative repercussions down the line. “If you think that your 15-year-old child has not seen pornography online, you are quite simply wrong,” she says frankly. “The average age of first exposure to online pornography is between 10 and 11 years old. This means that if you have not had proactive talks with your child by this age, you have missed the boat.”

I’ll admit that hearing my daughter say the word “vulva” at 22 months was jarring. I’ll also admit that I wasn’t 100 percent clear on the demarcation of vulva and vagina until an embarrassingly old age. For reasons that now seem pretty pathetic and feeble, I just didn’t think it imperative to know all the ins and outs of my own body; it more or less did its thing, I kept it clean and maintained and went about my day.

In hindsight, it’s unconscionable that I just accepted these knowledge gaps, the same way one might shrug about being a little hazy on facts long forgotten from a middle school history class. The difference between sitting through a sex ed class in which your P.E. teacher describes the grisly side effects of various sexually transmitted diseases and taking the time to get to know your own body is colossal.

So, it’s my turn. I want to make sure that my daughter knows exactly what her body parts are, what they may eventually do and create. When she points and asks direct questions, I make sure not to mumble vague responses like “that’s your chest” and redirect her attention because of any awkwardness I may feel. I tell her what breasts and nipples are, that many people have them, and remind her that that’s where my milk once came from, the milk that sustained her during the first eight months of her life. And she says “oh,” understandingly, smiles, and wanders away, her curiosity — momentarily — satiated.

For most, speaking matter-of-factly about a subject so sensationalized to an impressionable child is no easy feat. Adults have had decades to develop all sorts of neuroses, traumas, and hardwired emotional triggers to questions that come as naturally to young children as “why is the sky blue?” or “can we go to the playground?” For a child, a question is merely a question: no subterfuge, no intent to disturb, no ulterior motive. Parenthood is a constant reckoning between ingrained instinct and learned response: that is, learning to respond with compassion, with honesty, and with candor, as opposed to suspicion or distrust. As a child’s first teacher, protector, and confidant, parents have an enormous responsibility to address all facets of growth, well beyond administering daily vitamins, scheduling dentist appointments, and performing silly voices during story-time. Teaching children that all parts of them are treasured, are valued, and worthy of understanding is essential to raising well-balanced kids.

“We never use words like weenie or pee pee,” a friend of mine tells me, when I ask how she addressed early sexual education with her 2-year-old son. She tells me that her own mother had been abused as a child, and in turn ingrained in my friend how crucial it was to be comfortable and familiar with and talking about her body, and learning how to say no. She brings the same principles to her own parenting practice, ensuring that her son will not only be empowered by knowledge of his body, but feel secure in it. “I want my son to love and respect his body and be comfortable speaking to me about anything he’s experiencing with it.”

If my mother or father had taught me what these body parts are called, and that they’re not to be played with, I think I would have been much better off.

When I spoke to two of my other friends about this, I was saddened to learn that they had both suffered sexual abuse as children. But rather than shirk these conversations, and the undoubtedly painful memories that they can evoke, their experiences have made them fierce in their commitment to keeping their daughters informed and enabled. “It's extremely important to me, to teach the correct names of ALL body parts,” one friend told me. “If anything were to happen, like abuse of any kind, the child can easily identify the body part.”

Unknowingly echoing her sentiments, my other friend lamented how damaging it was to be so unaware of her own body in the wake of her abuse. “If my mother or father had taught me what these body parts are called, and that they’re not to be played with, I think I would have been much better off.”

Treating nipples, vulva, penis, butt the way we do a rendition of 'heads, shoulder, knees, and toes' — will do the work of divorcing our learned neuroses from simple scientific fact.

Being a parent to a very young child can feel at times like an exhilarating adventure in worlds you once couldn’t begin to imagine, and at other times, a wholly involuntary retrospective that forces you to examine prejudices, insecurities, and pockets of shame you’d believed were buried deep enough to forget. In teaching a brand new human how to actualize themselves as an autonomous, caring, and intelligent person, much is revealed about ourselves. Sex is both the great equalizer and the one area of our interior and exterior lives that forces us to reckon with hierarchies of influence and power, and where we place ourselves within them.

But trying to unpack these complexities within the context of teaching our children about their bodies, whether consciously or subconsciously, is where shame and embarrassment surface. Taking it back to basics — treating nipples, vulva, penis, butt the way we do a rendition of “heads, shoulder, knees, and toes” — will do the work of divorcing our learned neuroses from simple scientific fact, as well as lay the building blocks for children to understand their relationship to their bodies, and find the language to articulate any discomfort or dysmorphia they may experience within them. The sooner we can figure out how to engage with our kids honestly and willingly, the better off they — and we — will be.

More Like This
Why Your Vagina May Be Itchy After Sex & What To Do About It
14 Recipes For Sick Kids When Everyone's Tired Of Canned Soup & Crackers
Why Is My Discharge Brown? Experts Explain
Why Is My Vagina Itchy? Experts Explain
What Parents Are Talking About — Delivered Straight To Your Inbox