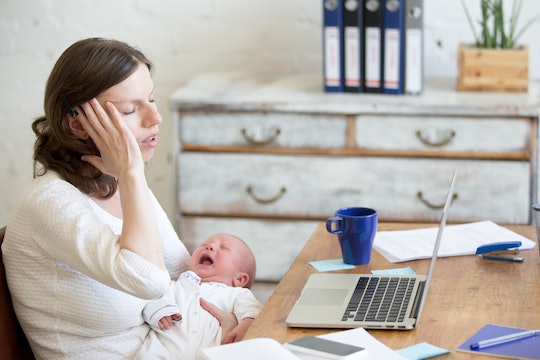 "Stressed" is a word I use to describe myself every day of the week, and it doesn't even begin to cover everything that is going on. As a millennial, I see the same thing with my friends; we're stressed over the list of responsibilities that never seem to stop growing — debt, work hours, bills, and (for some) their own children. It doesn't come as a surprise to anyone that a new study has found that millennials are really stressed out and millennial parents, in particular, can definitely understand why.

A new study conducted by Mattress Firm (yep, you read that right), examined 2,000 millennials and found that they don't do too well when it comes to sleeping — due to stress. According to the New York Post, the study found that millennials spend 63 (out of 365) days a year stressed out.

To put this into even more perspective, the study found that the average millennial spends over four hours a day worrying about something and as many as 71 percent wake up in the middle of the night up to three times a week feeling stressed (work nightmares are real, take it from me), as the New York Post reported.

Any parent can probably relate to waking up in a cold sweat, worried that they forgot to pack their child's lunch or sign their permission form for the next school day — and they should know that they're definitely not alone. There are plenty of reasons as to why millennials can't sleep and are so stressed out.

According to the New York Post, the study found that money and finances are the top reason why millennials are so stressed out. This is followed by a lack of sleep, their health, workload, and future of their country. If you're a parent, then you're probably thinking that these are things that run through your head at any given moment. Millennials made up for 90 percent of all new parents this year, according to Winnie — so all of these stressors pertain to them tenfold.

Finances are the biggest contributing factor as to why millennials are so stressed. Sure, health is a huge stressor (especially with the current state of health care in the United States). But time and time again, studies show that finances are bringing millennials down, which is why it is so important to talk about it.

So many millennials are crippled by student debt — an average of $26,000, according to The Atlantic — and many are just trying to figure out how to get by. When you throw a kid into the mix and the added cost to raise them, things can become a little stressful. In 2016, according to TIME, The College Investor found that the largest starting salary for a millennial is a little over $43,000 a year. In 2017, it costs parents anywhere from $12,350 to $14,000 on average a year to raise a child, according to CNN. According to the U.S. Department of Agriculture, this number only increases as children get older. When so much of your income is going straight to your child (and you don't see the benefits of it immediately), its no wonder why millennials are so stressed.

The biggest expense when it comes to having a kid, according to CNN, is housing, which takes up 29 percent of the total cost of raising a child. Millennials aren't necessarily in the market to buy a house because, according to The Atlantic, they can't save up enough for a down payment or afford to keep up with mortgage payments. Only 37 percent of millennials owned their own home in 2016, according to research conducted by Barkley.

It costs a lot to be a millennial parent — both physically and mentally. Millennial moms are more likely to say that they have lost a sense of time, and therefore lost a sense of themselves, according to the Chicago Tribune, because of parenting. This constant stress and lack of sleep not only has an effect on their wallets, but on their own identity, too.

But these findings are nothing new. A 2015 study conducted by the American Psychological Association, according to Business Insider, found that millennials are the most stressed generation by far and reiterated the results for this recent study. While both studies found that money is the biggest stressor for millennials and parents, the study conducted by the APA found that parents reported higher stress levels than non-parents. So it's really not just all in your head.

Sure, parents only account for 40 percent of millennials. But financial stress (and stress in general) is even more of a burden with multiple people in the mix and even more of a reason as to why millennials don't get enough sleep at night. "Stressed" barely begins to cover it.

More Like This
An Ode To Kirstie Alley & Her Messy Self
Eric & Donna's Daughter Will Ruffle Red & Kitty's Feathers In 'That '90s Show'
Pinterest Predicts Their Top 2023 Trends In Parenting, Beauty, Fashion, Home, & More
Ryan Reynolds Posted A Festive Photo With Blake Lively (& Her Baby Bump) In Holiday PJs