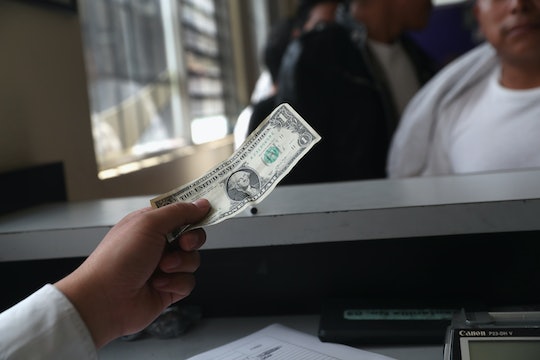 Turns out that millennials aren't ready to follow the same financial route as their parents — and not exactly for lack of trying. According to Business Insider, many millennials' beliefs about investing and their attitudes about saving money were largely formed by the Great Recession. As a result, millennials aren't investing as much these days, which, to be honest, isn't totally surprising.

A recent survey from Legg Mason Global showed a "strong majority of Millennials" (82 percent to be precise) said their investment decisions were impacted by the financial crisis and Great Recession. That same study found that, by comparison, older generations like the Baby Boomers were less affected. 13 percent of Baby Boomers and 14 percent of those 65 or older said their decisions were influenced by the crisis in the study.

And there could be real repercussions to the impact the Recession has had on millennial investing. Tom Hoops, the executive vice president and head of business development at Legg Mason, said the tendency of millennials to steer clear of risky investments could keep them fairly safe if another crisis hits — however, it also lessens the total amount of money they can ultimately save for retirement. Essentially, the way millennials may be "spooked" as a result of the Recession now could affect them negatively, decades later.

The fact that millennials aren't as keen on investing is not for lack of trying on the part of Wall Street. As USA Today reported, "It's offering socially conscious 'Clean and Green' funds, apps that let them buy stock with spare change, robot-driven portfolios and chatty, bite-size articles on handling money." Wall Street is trying to attract millennials, it just might not be working as well as decision-makers might hope.

According to that outlet, the market crash in 2008 left millennials "distrustful of Wall Street." Merrill Lynch's Private Banking and Investment Group concluded in a survey entitled "Millennials and Money" which showed that "skepticism appears to exist in this generation's very DNA."

As USA Today reported, people in their 20s to mid-30s are entering critical earning years, and millennials are America’s biggest generation. So it makes sense that Wall Street is courting their cash. But with the Recession looming large in millennial memories, that's easier said than done.

However, things may be turning around. According to CNBC, nearly a third of investors age 18 to 34 recently said they plan to shift more of their retirement savings into stocks, according to a survey from MassMutual. That outlet spoke with Jonathan Swanburg, a certified financial planner with the Tri-Star Group in Houston, Texas, who said,

I have a large number of millennial clients and I have noticed a definite uptick in the desire to own stocks.

So millennials may be cautiously changing their attitudes about investing, though it appears to be a pretty recent development.

According to another piece by USA Today, just one in three millennials say they invest in stocks, according to a Bankrate.com survey. Six in 10 reported that they have less than $10,000 saved for their post-working years, as reported by the Ramsey Solutions’ 2016 Retirement in America Survey and USA Today.

That outlet reported that this reluctance to invest and save may be because millennials experienced the 2008 market collapse and the financial crisis. Plus, older millennials remember the internet stock bubble burst in 2000. But USA Today also reported that the number of millennials who have already started to invest more suggests that they may be more open to embracing the stock market in time.

But some millennials are still reluctant. Business Insider reported that a majority of millennials reported that they "live for today," with 36 percent saying they aren't thinking about tomorrow. It may be time to start doing that when it comes to finances, even if the investments made by millennials are more cautious initially than those of the generations that came before them.