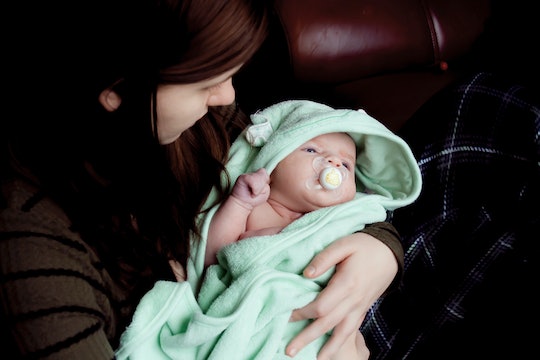 Millennials Often Underestimate The Cost Of Having A Baby

It’s no secret that raising kids costs parents a pretty penny. Whether it's something immediate like a never-ending supply of diapers you’ll need during that first year of parenthood, or something for the future, like a deposit into your little one’s college tuition savings, it all adds up to one hefty bill. And though most know of the steep costs that come with having and raising children, a new study suggests that millennials really underestimate just how much babies cost and many of them aren’t financially prepared when they do become parents.

A new analysis by NerdWallet looked at the expenses of a baby’s first year in two hypothetical households: one with a $40,000 annual income to represent “a lower-income family that wouldn’t qualify for substantial government assistance” and a household that brings in $200,000 to represent a higher-income family that puts money towards things like life insurance, in-home nanny care, and college savings. And regardless of how much money would-be parents make, raising a kid in the United States is costly.

For the $40,000 two-parent household, the cost of raising a baby during the first year could cost parents $21,248, which includes expenses for food, housing, transportation, diapers, health care costs, and other necessary baby items. According to the NerdWallet analysis of an online survey conducted by Harris Poll, these parents would be “savvy shoppers” when buying things like baby clothes and toys and wouldn’t invest in life insurance or start saving for college during the first year of parenthood.

For the $200,000 family, parents could spend $51,985, a figure that includes the same baby necessities as the lower-income household as well as expenses for childcare, life insurance policies, and college savings.

The poll found that these figures may come as a shock to many as more than half of expectant millennial parents — 54 percent — think these expenses will cost them $5,000 or less, according to NerdWallet. And because they severely underestimate these costs, the poll claims that hopeful parents are unlikely to prepare their finances as much as they should. While it's a not a huge percentage, the analysis found that 29 percent of current parents "had no money saved up before the baby was born to help with the costs of the child’s first year."

But, there are a lot of reasons why millennials lack substantial savings for their future children. As USA Today pointed out, 18- to 34-year-olds "face a unique set of challenges" as they've struggled through the Great Recession, are paid 20 percent lower salaries than baby boomers at the same age, and hold more student debt than any previous generation.

So it's no wonder that so many millennials aren't exactly financially prepared for one of the most challenging, rewarding, and expensive chapters of their lives. However, if you're expecting or hoping to have kids soon, you can get an idea of what a little one will cost by using NerdWallet's baby calculator.

TL;DR: becoming a parent is expensive. So, whatever you thought it might cost you, play it safe and triple that figure.