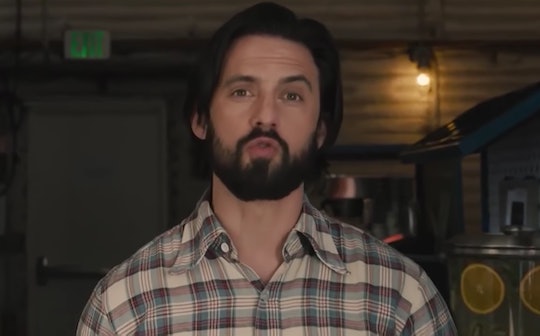 Odds are, fans of the popular NBC drama, This Is Us, are still reeling from the latest episode that finally revealed how Jack Pearson died. (I mean, how couldn't they be?) After all this time of getting to know the family patriarch — even though, yes, viewers knew he had already passed — the cause of his death is absolutely soul-crushing. As we all found out last week, it was a previously-owned Crock-Pot slow cooker with a faulty switch that caused the family's home to become engulfed in fames. Fans have pretty much sworn-off the beloved kitchen appliance for good — and the brand has been scrambling to do some serious damage control ever since. Well, Milo Ventimiglia forgave Crock-Pot in a new Super Bowl promo and honestly, it's everything.

As People reported, the promo was released Saturday ahead of Sunday evening's big game — and before the highly-anticipated follow-up episode that will show fans exactly how Jack died (presumably) in the fire. "The big game is fast approaching and for many of us, this day brings an opportunity to gather with friends and family — loved one thats we don't get to see all that often," Ventimiglia says in the promo, while looking straight into the camera. "But in 2018, gathering with friends and family is ... it's not as easy as what it used to be." While in character, "Jack" continues:

Now the country's divided and sometimes, that can make it tough to find common ground. But this year — this year, I think we should all take a deep breath, find the ability to forgive, and remind ourselves there is no difference so great that we can't overcome it.

And then, wait for it ... He scoops something out of a Crock-Pot slow cooker like it's NBD. Guys, Jack Pearson has actually forgiven his "killer." *Sobs*

If you remember, the initial backlash from "that episode" prompted show creator Dan Fogelman to issue an important reminder to This Is Us fans, BuzzFeed reported. "Taking a moment to remind everyone that it was a 20-year-old fictional Crock-Pot with an already funky switch," Fogelman tweeted. "Let’s not just lump all those lovely hardworking Crock-Pots together.”

In response to the online outcry, Crock-Pot also created a Twitter account to tame consumers' safety concerns, HuffPost reported. Furthermore, Newell Brands released a statement in response to the epic episode, reported The Chicago Tribune. “The safety and design of our product renders this type of event nearly impossible,” Newell said. “Our Crock-Pot slow cookers are low-current, low-wattage (typically no more than 200 or 300 watts) appliances with self-regulating, heating elements.”

As far as the Super Bowl promo is concerned, some fans were seriously impressed. "This is genius PR!" one Twitter user wrote. "Sorry to @CrockPotCares for blaming you in anger over the loss of a loved one! Love you @MiloVentimiglia." Another person tweeted, "Public relations genius right here, folks."

Others? Not so much. One Twitter user wrote, "You can't make us forgive you @NBCThisIsUs for killing Jack with a Crockpot It won't happen Crockpot may be innocent but the writers are not." Another person chimed in with, "@MiloVentimiglia forgives Crock-Pot after stunning #ThisIsUs revelation and asks you to do the same. Easier said than done, my friend."

Look, I'm sure the writers of This Is Us didn't intend on ruining the reputation of Crock-Pot for all eternity by having one of its slow cookers be responsible for a beloved character's death. Unfortunately, though, viewers and non-viewers alike were seriously freaked out following this revelation. I think this promo was a hilariously genius way to make amends for scarring an entire nation. Because if Jack Pearson can find it in his heart to forgive Crock-Pot, I think the rest of us can, too. R.I.P, Jack.