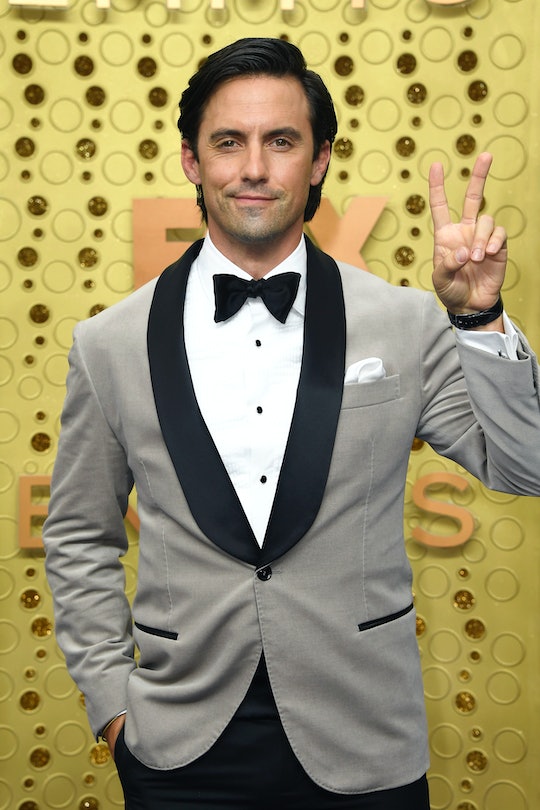 Milo Ventimiglia Brought His Parents To The 2019 Emmys & OMG, My Heart

Milo Ventimiglia is one of the hottest actors in Hollywood, and this year, he earned his third Emmy nomination for This Is Us. This could be the night he brings home the coveted award, and he brought two very special guests with him to the event. Milo Ventimiglia's parents at the 2019 Emmys were beaming with pride, and it was the cutest thing ever.

“My mom and dad are here,” Ventimiglia said while talking to E! News at the Emmys purple carpet. “This is their first time — To show them what this show is, is an experience.” And when asked how they felt about their son's accomplishments, Ventimiglia's father adorably noted how "very proud" they were. Awww!

The This is Us star has always been vocal about how much he appreciates his parents and their support. "My mom and dad are kind, and they're giving and loving, and raised my sisters and I with hugs and kisses and love, and a kind of broad inclusion of the world," the actor said during a 2017 interview with Build. "At the same time, it didn't mean that they were people to be walked all over. They stood up for themselves and their way of life and their family — So I saw this very strong family unit growing up and a family that I was comfortable being a creative kid."

He told the outlet that throughout his career, even through rejection and all the ups and downs that come with being an actor, his parents stood by him. With his third Emmy nomination for Best Actor in a Drama for NBC's hit series This is Us, it looks like Ventimiglia's hard work, and his parents' support really paid off.

When being interviewed by Jimmy Kimmel, Ventimiglia revealed that he's been asking his parents to come to the Emmys with him for years, but they were never really interested in going. "The first time I got nominated, I said, ‘Hey, guys, I’d love you to come to the Emmys with me,’” he said on Jimmy Kimmel Live!. “And my mom was like, ‘No, no, no, I don’t want to be in the big crowd.’ And my dad said he’s holding out for the Oscars. And I was like, ‘OK.’”

He said when he was nominated for the second time, he asked his parents again, but their response was the same. “Second year, I was like, ‘Hey, guys, so do you want to go to the Emmys with me this year?” Ventimiglia told Kimmel. “My mom was like, ‘Oh, no, no, no, it’s fine, Sweetheart, you go.’ And my dad is like, ‘I’m holding out for the Oscars.’ And I was like, ‘Dad, these are like the Oscars of TV.’”

But this year, when the actor was nominated for the third time, his parents changed their mind. “But then, third year, the nomination happens, Mom and Dad, of course, are like one of the first phone calls you make," he continued telling Kimmel. "And I pick up the phone and I’m like, ‘Hey guys.’ And I was so ready to be like, ‘I’d really, really like it if you came to the Emmys with me this year.’ Before I even got that out, both of them are like, ‘Oh, we’re going. We’re going.’”

On the Emmys red carpet, Ventimiglia's parents looked just as proud of him as he was of them, and I'm sure they're hoping to be his lucky charm this year.