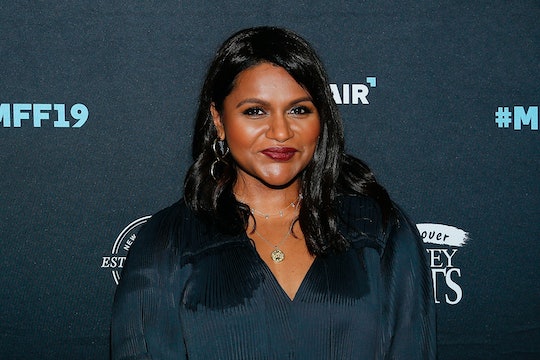 When Mindy Kaling gave birth to a baby girl in 2017, fans likely wondered who the father of baby Katherine was. The actress wasn't romantically linked to anyone at the time, after all. (Plus, Kaling opted to give her daughter her own last name.) To this day, she still hasn't shared this tidbit of information with the world — which is definitely her right. However, the mom of one did recently share an interesting fact about Katherine. In an interview with Good Housekeeping, Mindy Kaling revealed BJ Novak is her daughter's godfather.

It's not entirely shocking, if you think about it. Yes, Kaling and Novak were once romantic partners. But they've known each other for a long time — and have remained best friends even after their relationship ended. Still, many have wondered just how "platonic" their relationship really is. And Kaling doesn't blame them in the least. “If I was on the outside looking at it, I would think the same thing,” Kaling told Good Housekeeping during an interview published on Friday, March 3. “But the truth is that B.J. is so much more like family now than a platonic friend. He’s the godfather to my daughter. He comes over like once a week. Sometimes he’ll come over just to hang out with her.”

In the When Harry Met Sally version of platonic friends, I too think that’s strange. But when you’ve known someone for as long as I’ve known him — the time that we met each other, which was like 24. Now, we’re both almost 40. It’s such a long time that he truly is just a part of my family.

As E! Online reported, Kaling welcomed her baby girl on Dec 15, 2017. Since then, not only has she kept the world in the dark about the paternity of her daughter, but she's made it a point to not share any photos of her face via social media. Katherine is 17 months old at this point — and most people still have no clue what she looks like.

But back to her godfather.

Kaling and Novak first met in 2004 when they were hired as writers for The Office, according to Insider. They dated on and off during this time — kind of like their characters on the show day — but haven't been romantically linked since. In 2015, Kaling opened up about her unconventional relationship with her former Office co-star. “I will freely admit: My relationship with B.J. Novak is weird as hell. He is not my boyfriend, but he is not my best friend,” she told In Style magazine, according to People. “I guess you could describe our relationship as a ‘romantically charged camaraderie with loud arguments,’ but I don’t think Facebook would accept this as a new status." LOL. (I think she would be correct.)

Ultimately, Kaling and Novak's relationship has evolved into BFF status — and nothing more. That didn't stop speculation in September 2018, when Kaling and Novak were spotted hanging out with baby Katherine in West Hollywood, according to Us Weekly. An eyewitness told the publication that Novak was "carrying" and "kissing" Katherine at the time.

It all makes sense now, right? BJ Novak and Mindy Kaling are longtime friends. And as it turns out, he's Katherine's godfather. So of course they're going to be spending time together — and with Kaling's daughter. Honestly, I couldn't think of a better guy for the job.