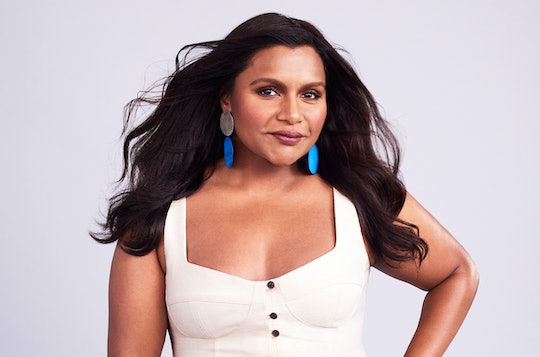 Single parenthood is challenging, especially when you're the only person who has to not only care for your child or children, but provide for them as well. Being a working mother and raising a family on your own isn't an easy task, and that's why representation, and conversation, about these experiences is so crucial. And in a new interview with Glamour, Mindy Kaling shared why being a single mom to her daughter, Katherine, has motivated her to "work so hard."

In a new interview for the digital cover story of Glamour, published on Tuesday, June 4, Kaling opened up about life nowadays, her work ethic, and of course, raising her daughter, Katherine, who's now a little more than 1 year old.

Kaling's ethos have always been strong. You might know her from her iconic roles as Kelly Kapoor on The Office and Dr. Mindy Lahiri on The Mindy Project, but behind-the-scenes, she was the writer who penned the most episodes (and was nominated for an Emmy at one point for one), according to Entertainment Tonight. But Kaling told Glamour that having her daughter — Katherine, whom she welcomed in December of 2017, according to Us Weekly — has completely changed the game for her. Whether it's her drive or her everyday schedule, her daughter is at the center of it.

And as Kaling explained to Glamour, single parenthood has specifically motivated her to work harder now. "The difference is I had my mom and my dad. She just has me. I know at some point I will have to do less, because it’s not like there’s a dad at home picking up some of the slack," Kaling told the magazine. "I think that’s another reason I work so hard — because I know that when she gets a little bit older, I want to be able to take off more time to spend with her."

Kaling has previously opened up about parenting Katherine, specifically highlighting in an interview with TODAY Parents in March 2018 just how "rewarding and" nerve-wracking motherhood can be at the time.

“I knew how much I would love her and love the experience of being with her. I never understood how much I would worry and how much that worry is unceasing,” Kaling told TODAY Parents at the time. "Happiness for me, now, is just a feeling of relief. I’m in a constant state of worry but I’m enjoying it too. I hope she’s developing correctly — I’m anxious constantly. I’m hoping that will change a little bit. I haven’t even thought about when she’s bigger."

Being Mindy Kaling, of course, the actress has also been open about those comical parenting moments. Most recently, according to E! News, she shared with Ellen DeGeneres that her little girl is pretty good at the art of bribery and emulates, uhm... Tony Soprano.

"I didn't know how much bribery there was in being a parent," she said on a recent appearance on The Ellen DeGeneres Show. "Every time I see her, it's like Tony Soprano. I go up to her and I'm like, ‘Hey, you have to give me the remote controller.' And she's like, ‘You have to give me your car keys... She's like in the mob. And she can barely talk, so that's my life right now."

Kaling's openness about single parenthood is inspiring and probably resonates with a lot of other single working moms (and dads). Motherhood is hard, and Kaling's honest and comic takes on it are always a breath of fresh air.