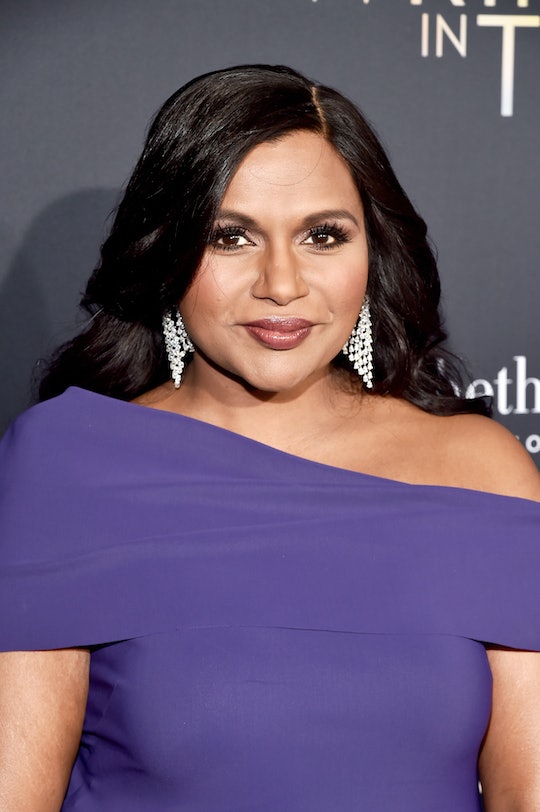 Mindy Kaling Shares The Scary Reality Of Having A Baby, & Every Mom Can Relate

When Oprah Winfrey spilled the beans about Mindy Kaling's pregnancy back in July, fans of The Mindy Project actress most definitely let out a collective "squeeee!" I'm not sure why — because I don't know her personally — but something about Kaling becoming a mom just seemed so perfect. Unsurprisingly, though, the famous mom-to-be remained relatively private about her pregnancy journey. And this hasn't really changed since Kaling gave birth to baby Katherine in December. However, in a recent interview, she provided a little insight into her experience as a mother so far. And Mindy Kaling's comments about new mom anxiety are spot-on.

As Today reported, Kaling still seems to be adjusting to one aspect of parenting for which nobody can accurately prepare moms and dads: Worrying about the wellbeing of her child. And honestly, this is something that most parents can probably relate to. Because from the time you first hold your little one in your arms, it literally never ends. "I knew how much I would love her and love the experience of being with her. I never understood how much I would worry and how much that worry is unceasing,” Kaling said, of baby Katherine. (Amen, sister!) “Happiness for me, now, is just a feeling of relief." She continued:

I’m in a constant state of worry but I’m enjoying it too. I hope she’s developing correctly — I’m anxious constantly. I’m hoping that will change a little bit. I haven’t even thought about when she’s bigger.

Sorry to break it to you, mama, but I'm willing to bet the majority of parents don't ever stop worrying about their babies — even when they're not babies anymore.

Still it's worth pointing out that sometimes, this "new mom worrying" goes beyond what is considered normal. In recent years, there seems to be more and more awareness for postpartum depression — which is amazing. However, another common disorder that doesn't seem to get as much attention is postpartum anxiety.

As many as 1 in 10 new moms experience postpartum anxiety, Parents reported. This mood disorder can be accompanied by a number of warning signs in additional to excessive worrying. These include: Changes in eating and sleeping, dizziness, hot flashes, rapid heartbeat, nausea, and being unable to sit still or focus on a particular task at hand. "We call postpartum anxiety the hidden disorder because so few moms recognize it and it goes undiagnosed," Dr. Jonathan Abramowitz, the associate chairman of psychology and director of the Anxiety and Stress Disorders Clinic at The University of North Carolina at Chapel Hill, told Parents. "It hasn't been discussed or studied much, even though it's a lot more common than postpartum depression."

Like many first-time-moms-to-be before her, Kaling also expressed a sense of anxiety about her impending motherhood, Us Weekly reported. In a September interview with Today's Willie Geist, a pregnant Kaling admitted:

Right now, I just feel so anxious. But, I’d like to be the fun mom. I know I’m gonna be the dorky mom. So, if I could be kind of fun, too, I think that would be nice.

Although I didn't seek treatment until after my third child, I suffered from both postpartum anxiety and depression. Especially when my babies were new, it was like a panicky feeling lingering just in the back of my mind ... like I couldn't sit still. I always had to be cleaning something, or working on something, or checking on my baby. And yet, no matter what I did, I still felt like a failure; I wasn't doing enough and was a terrible mother. Logically, it didn't add up. But I couldn't shake these unwarranted feelings of worthlessness — and in turn, I was always stressed, exhausted, and angry. And I took it out on the people I loved most. Thankfully, taking an antidepressant has greatly improved my quality of life. But I wouldn't wish it on anyone.

I want to be clear, though: I'm not saying that Mindy Kaling for sure has postpartum anxiety. Still, I think it's awesome that she's so open about one of the struggles of new motherhood — and especially single new motherhood. Because all of a sudden, you're responsible for this tiny human who depends on you for literally everything. It can be terrifying, for sure. And it's important for new moms to know that they don't have to suffer in silence if something seems more than a little "off." Because they're definitely not alone.

More Like This
Mindy Kaling & B.J. Novak Joke About "Complicated Relationships" At The Emmys
Prince Harry's Sweetest Quotes About His “Granny”
Queen Elizabeth II's Most Romantic Quotes About Prince Philip
Olivia Wilde Got Candid About Co-Parenting Jason Sudeikis & Life As A Single Mom