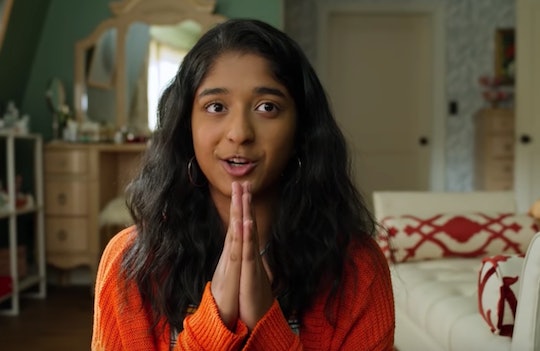 Making its way to everyone's watchlist later this month is Mindy Kaling's Netflix show Never Have I Ever. Starting on April 27, you can finally start streaming the comedy series, created and produced by the hilarious actress, which tells a coming-of-age story about the "complicated life" of a first generation Indian American teenage girl named Devi and is loosed based on The Mindy Project's actress' own upbringing.

Played by newcomer Maitreyi Ramakrishnan, Devi is described as an "overachieving high school sophomore" who has a short fuse that often gets her into complicated and difficult situations, according to Variety, which is also likely to lead to some very hilarious and awkwardly relatable moments. The show's new teaser trailer, released in March, only hints at the complications to come.

"Hey Gods, it's Devi Vishwakumar, your favorite Hindu girl in the San Fernando Valley. What's popping?" Devi says in a prayer. "I think we can all agree that last year sucked for a number of reasons, so I thought of a few ways that you could make it up to me. One — I'd like to be invited to a party with alcohol and hard drugs. I'm not going to do them, but I'd like the opportunity to say 'No cocaine for me, I'm good."

Devi's other wishes? To have her arm hair thin out and to get a boyfriend, preferably one who plays sports and is a "stone cold hottie".

While speaking about the series back in February, according to Variety, Kaling said that it was important for Never Have I Ever to show a different side to the nerd stereotype. "We're ambitious, we have obnoxious personalities sometimes, we want to have sex and dreams like other kids," she said. "I felt lucky to be able to show a show about an Indian nerd who's also badly behaved, to show that because I'm deeply familiar with it."

Born and raised in Cambridge, Massachusetts, Kaling has previously opened up about her adolescence and lessons she's learned from it. For instance, in her 2011 book, Is Everyone Hanging Out Without Me?, she penned an essay full of advice for teenage girls, advising them to not be popular for their own good. "Teenage girls, please don't worry about being super popular in high school or being the best actress or the best athlete," she wrote, adding that she was "never the lead" in the school play or went to a party with alcohol at it. "What I've noticed is that almost no one who was a big star in high school is a big star later in life, she added. "For us overlooked kids, it's so wonderfully fair." This is certainly true for Kaling.

You can get a glimpse of Kaling as a teenager when the first season of Never Have I Ever premieres on Netflix on Monday, April 27.