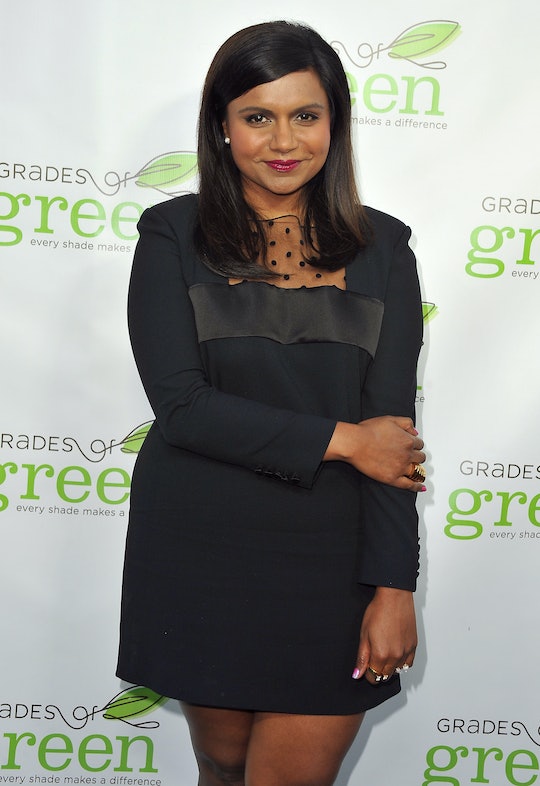 Mindy Kaling Has Perfected The Art Of Mommy & Me Matching Outfits

Celebrities these days are so secretive about their children, but when they do decide to share glimpses into their family lives it's amazing. That's why fans are loving Mindy Kaling's new photo with her daughter Katherine, which she shared on Instagram on Sunday. Although you can't see the baby's face, the photo is totally adorable and will melt your heart.

In the picture, the Oceans 8 star can be seen posing with her "little" in her arms wearing matching pajamas. Their precious onesies are covered in brightly colored fruits, veggies and butterflies. Kaling, 38, said in her caption she was enjoying "a lazy Sunday" with her baby girl. The pair appear to be standing in a room overtaken with baby things, including a colorful playpen and foam floor mats. Baby Katherine is looking the opposite direction in the photo, but her short brown hair and a cute clip are on full display in the sweet snapshot. The Instagram picture has been liked by more than 200,000 fans, and the comments are full of positive messages for first-time mom Kaling, including, "So cute + love the happy color," and, "Omg, So cute!!!!!" Kaling hasn't responded to the outpouring of love and support, but we're sure she appreciates it.

Kaling doesn't often share photos of her daughter, and has never shown her face to the world. When she does give fans a glimpse into her life as a mother, like her lat photo with Katherine in December 2018, the response is overwhelmingly positive. Like in her most recent post, the pair were wearing matching PJs, this time decorated with Eiffel Towers, moons and stars, while they awaited Santa's arrival. Katherine was once again turned the opposite direction, distracted by a cute pink guitar and a big window.

While she's extremely private about her daughter, Kaling has spoken about motherhood in the past. In January, the Mindy Project star opened up to HuffPost about adjusting to parenting, revealing how she was learning the ropes. She shared in the interview that she tried to avoid annoying baby toys, but was ultimately defeated.

"I tried to do that thing at the beginning where I only got her these, like, hipster wooden toys that are beautiful to the eye and don't make your house look like it's been overrun by children," she shared with HuffPost. "And she hates them, so I've had to give them all away. She only likes primary color, loud, beeping toys that are impossible to turn off."

Kaling also talked about the affect parenthood has had on her body, revealing that she'd recommend new parents strengthen their core and back to be better prepared for all the "leaning over." She told HuffPost her daughter "is at that stage right now where she can't walk but she really wants to," which means lots of hunching over for the actress. Kaling added that she was "in a world of pain" as a result.

"Simply logistically, I would've strengthened my core muscles and my back and arms more, because the amount of leaning over — my daughter is at that stage right now where she can't walk but she really wants to, so I'm constantly just hunched over trying to help her walk around the house," she told the outlet. "And I have never worked on my back strength or core strength in my life, so I'm in a world of pain. So I would've strengthened those muscles a lot more before."

In addition to the physical struggles of motherhood, Kaling had to face the potential professional setbacks of becoming a mother, which she opened up to People about. Kaling said she'd been lucky to avoid too many issues. After welcoming her daughter, she told the outlet, "I'm creating my own opportunities," adding that she's been blessed to be able to bring her baby with her often when she has work to to do.

"And when I do that, my baby comes to work a couple times a week, and I live 15 minutes away from [work], and I create our schedule, so if I need to take her to the doctor, I can," she told People. "I know that's not the case for everybody else, and I feel really lucky, but yeah, that's my life right now."

Though she's had it easy in terms of balancing work and motherhood, Kaling admitted to the outlet that parenting — specifically single parenting — is no walk in the park. She admitted she was "completely wrong" about how being a mom w as going to go, adding that it made her "appreciate marriage."

"It certainly makes you appreciate marriage because you have someone else to be like, 'Hey, can you do a one-man show now that is both hilarious and poignant for her, and is filled with physical comedy?' So I've been impressed by myself, actually," she said at the time.

News of Kaling's pregnancy broke in July 2018, and her daughter was born in December, according to E! News. The actress first broke her silence on the pregnancy in August, telling NBC's Today show that she w as "really excited" to become a mom. It remains a mystery who the child's father is. Kaling hasn't been romantically linked to anyone in some time.