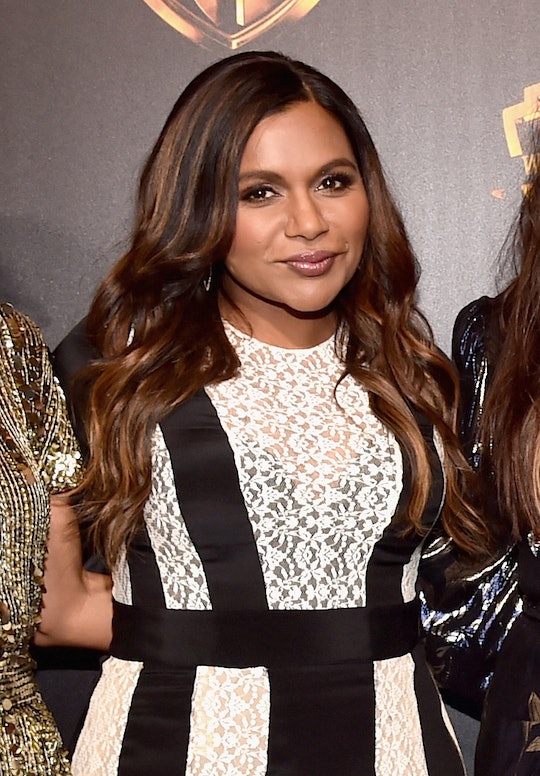 Plenty of women (like myself) have textbook cravings during pregnancy. Out of nowhere, tacos might be the only thing that sounds remotely appetizing. And if I don't obtain a tortilla shell stuffed gloriously with marinated meat and the works like pronto, everyone around me will feel the full wrath of the pregnancy craving beast. Needless to say, I get away with eating whatever I want — and however much of it — for nearly 10 months at a time. Except there's a catch; even after giving birth, I found that my random desires for specific food don't always go away. And I'm definitely not alone. Not by a long shot. Because Mindy Kaling joked she has "pregnancy cravings" months after giving birth to her baby girl and they are totally, 100 percent legit.

The Ocean's 8 actress recently opened up about her life as a new mom while making an appearance on The Ellen DeGeneres Show, E! News reported. DeGeneres started off the sit-down with Kaling by asking her about baby Katherine, who is now 6 months old, believe it or not. "It's been pretty easy, mostly because she needs me for sustenance. So she behaves well," Kaling said. "The hardest part is when I was really pregnant — when I came to see you last — I was just eating whatever I wanted."

Because when you're pregnant, you can just say it's like cravings. You're like, "I needed to have 11 cupcakes because of my pregnancy cravings." And everyone's like, "No, she's about to have a kid. Let her eat whatever she wants." But I haven't altered that, that much, since having the kid. So yeah. It's not normal to be not pregnant and have a birthday cake at Tuesday afternoon when it's not your birthday.

"Well I think you look great," DeGeneres reassured. "But I think that would be hard to all of a sudden stop eating a certain way for eight months, or however long you were doing it."

"Thank you," Kaling replied. "Especially when you were eating terribly."

From my experience, continuing to eat all the food after giving birth is totally normal. Like DeGeneres suggested, I have a feeling it has to do with just being used eating a certain way. However, breastfeeding — combined with sleeping less during the night (because newborns) — could definitely be another piece of the "pregnancy craving" puzzle, as Parents explained. "Reduced nighttime sleep can cause prolactin to be produced in higher levels during the day, causing increased hunger — especially for carbohydrates," Diana West, lactation consultant and La Leche League International director of media relations, told Parents.

So those postpartum cravings? Totally normal. According to Parents, West added:

They're actually nature's built-in way of ensuring that nursing mothers get enough energy to cope with the reduced amount of sleep that can happen with taking care of a baby at night.

As Us Weekly reported, Kaling welcomed her first child on Dec. 15 — a daughter whom she named Katherine. Although Kaling has a strict no-photo rule for her daughter, the former star of The Mindy Project has previously opened up about her experience as a mother. During an interview with Today, Kaling told Hoda Kotb that her baby girl is "so great, and I just love being a mom." As always, though, Kaling kept it real, adding:

... except for crying for the longest time. Then you start wondering, "Does she care about me? Know about me besides that I'm a food source for her?"

So rest assured, Mama Kaling — continuing to crave cake even though you can't technically blame pregnancy isn't something to be too worried about. Especially when you're a superstar producers/writer/actress/bad*ss mom who is already juggling about a million things at once. Go ahead and eat your Tuesday afternoon cake; you've earned it.