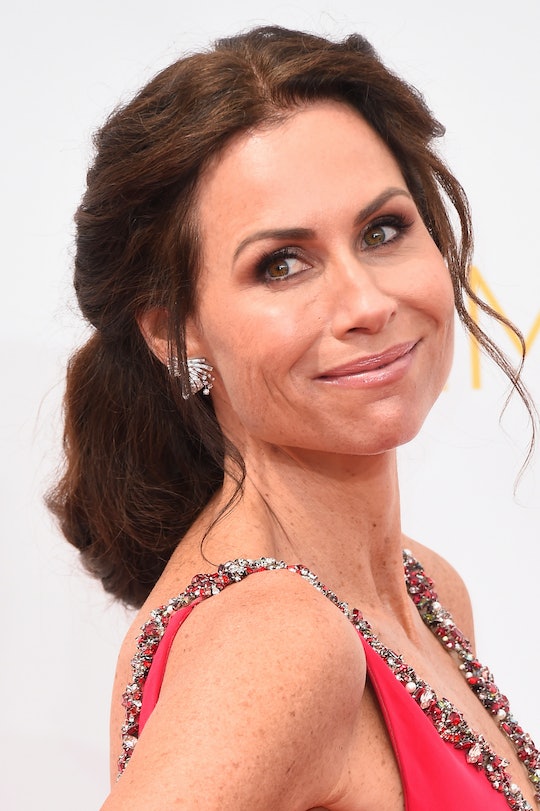 During an interview with ABC on the 2016 Emmys red carpet, actress Minnie Driver took a special moment to plug her upcoming TV show, Speechless. At the end of the interview before breaking for commercial, Driver asked ABC host Chris Harrison if she could make a quick shoutout. And Driver used the time to make a very smart plug, but also a very exciting announcement. Minnie Driver's shout out to parents of special needs kids at the 2016 Emmys both teased the upcoming release of the show, but also carved out a space for a very important (and often, very marginalized) demographic on primetime television at a time when thousands (if not millions) were tuning in to watch. Driver expressed how excited she was for parents of children with special needs to see the show. And to be honest, I cannot wait to watch Driver and co. give voice to an experience and a reality so many parents and their children are living with day to day.

The show, which debuts in fall of 2016, focuses on the Dimeo family as they start over again in a new town. In the upbeat and fun trailer, Driver is hauling ass to school in the morning — with three minutes to get everyone to class on time! — and ducks a ticket for speeding ("Not her," an officer says, adding, "Life's too short."), and a woman who tries to shame her for parking in a handicapped spot ("Excuse me," she says, "There's no handicapped parking jacket on your car.") in order to do something. When we meet her son, Driver says, "He's all there upstairs and he's got a thing about staring."

Driver's character announces that the family is moving so that their son JJ can have full-time care. The only "shock" is that well, things are not quite as exciting as Driver's character makes them seem. Speechless's trailer keys into one of the most incredibly intimate realities of raising a differently-abled child in America: the exhausting fight for an equal opportunity at a fulfilling life.

Though the sneak peek of Speechless paints with a very generous stroke an overview of what to expect from the show, it's clear that it has all the makings of an incredibly poignant, very much needed, honest depiction of what being a parent of a child with special needs is like. Speechless also taps into the relationships between family members (mom and dad, parent and child, sibling and sibling) and how those interactions help shape our view of the world overall. But perhaps it's the fact that Speechless seems to recreate life as normal on a very honest level that has me most excited.

Sure, the show follows the life of a character with special needs (which is very sorely needed in TV and especially on primetime TV), but beyond that, it taps into very human, very authentic experiences we can all relate to. Time will tell what the show will do for its viewers, but I can't lie: Driver's 2016 red-carpet shoutout has me absolutely eager to tune into its premiere.