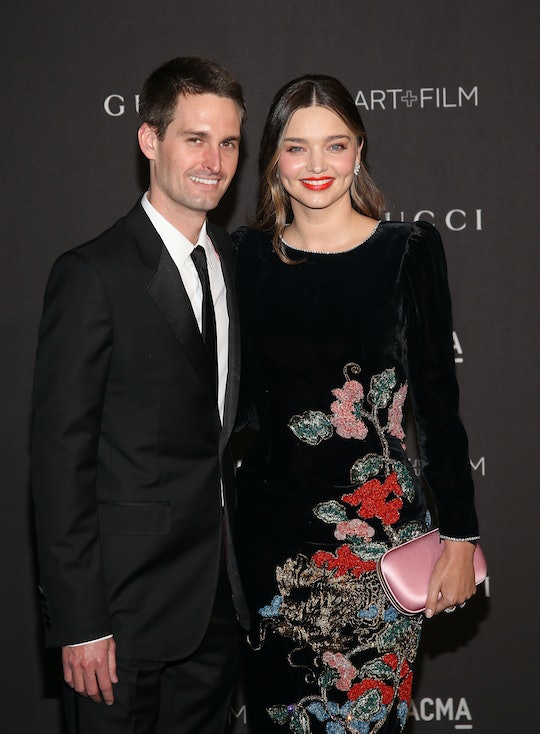 It's official! Evan Spiegel and Miranda Kerr going to be parents again. Miranda Kerr is pregnant with baby No. 3 and her announcement was so subtle and glamorous. The Australian model confirmed the news to Us Weekly and People via her rep, but shared the news in her own, very personal and sweet way as well. Instagram photos show Kerr at the Gruner & Jahr Spa Awards on Saturday, March 30, showing off her growing bump.

According to the Daily Mail, Kerr walked the red carpet at the Brenners Park-Hotel where she was photographed holding her tiny baby bump. The 35-year-old wore a light pink gown to the awards. Per the tabloid, her look featured a trendy cape that reached the floor. Kerr reposted a photo from the event on her Instagram, in which she's cradling her bump. She captioned the photo with the pregnant emoji, a pink heart, and an angel.

Us Weekly confirmed on Saturday that Kerr was expecting. In a statement from her rep, she, her hubby and sons Flynn and Hart said they were "looking forward to welcoming the newest member to their family." The magazine did not say whether they were expecting a boy or a girl, nor did it say how far along she is. It's unclear at this time when Kerr will give birth.

Romper reached out to a rep for Kerr and is awaiting a response.

The Victoria's Secret model and Spiegel welcomed their first child together, a baby boy called Hart, on May 7, 2018. Kerr already had an older son named Flynn. She shares Flynn with ex-husband Orlando Bloom, who recently got engaged to Katy Perry. Kerr gushed about welcoming her second child in an October interview with Us Weekly. In it, she said that as a mom of one, she never thought her heart could be more "full of love," but it "expands."

"Your heart expands," she told Us Weekly. "You feel like your heart is already so full of love and gratitude with one, and then it just explodes even more."

Kerr and Spiegel, who co-founded Snap, married in 2017, according to Business Insider. Snap is Snapchat's parent company. Per the outlet, the pair got engaged in 2016. Their relationship began in 2015. According to Business Insider, Kerr and her beau met at a dinner for Louis Vuitton in Los Angeles. The night they met, Harper's Bazaar editor-in-chief Glenda Bailey reportedly told Kerr, "I bet you two are going to get married."

Kerr and Bloom split in October 2013, Us Weekly reported. They had been married for three years at the time. Kerr opened up about the split in an interview with Elle Canada, telling the outlet that she went through "a really bad depression" after the split. Now, the pair have a great relationship, Bloom told Elle UK.

"With Miranda, there was a sense that I don't really want my son to go back through the Internet where people have made up lies [about us]," he told the magazine. "Miranda and I have a remarkable relationship. We co-parent really well."

Kerr hasn't said any more about her third child. She and Spiegel are likely still basking in the excitement of it all. Congratulations to the parents-to-be, and to big brothers Flynn and Hart!