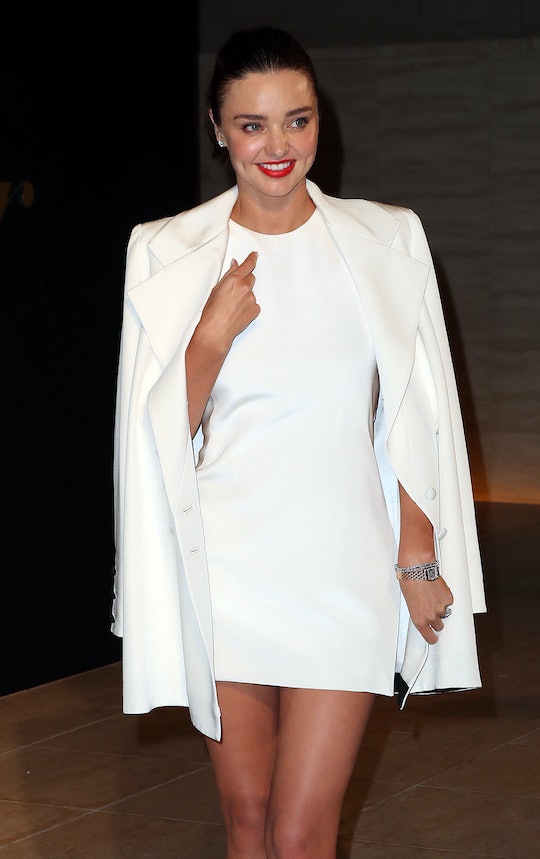 When you're born into a family consisting of one (or two) of the world's most privileged celebrities, it's easy to assume that everything will be handed to you. But just having the means to provide for your kids doesn't always translate to having the strong parenting skills it requires to recognize that learning the value of a dollar is an invaluable lesson. Miranda Kerr makes her kids work for what they want, and it's a really refreshing reminder.

In a new interview with InStyle, Kerr opened up about her life, her business, and of course, her son Flynn, whom she shares with former husband Orlando Bloom. Of his work ethic, Kerr explained that she tells her 8-year-old that if he needs to start working and saving now if he wants to purchase something big.

"I told Flynn that if he wants a car, he needs to start saving now,” she told InStyle, explaining his interest in setting up a lemonade stand. “He needs to learn the importance of working for himself because I had to do that.” Of course, those ethos are on full display right now, as Kerr was featured for her work as an advocate for eco-friendly, "green" beauty.

But getting a grasp on finances young isn't the only wisdom that Kerr is distilling to her children. In fact, given her and her ex's celebrity status, she's been very careful with issues of privacy, as well. But like her son's lemonade stand entrepreneurship, her family's way of navigating that is pretty much as normal as it comes.

Given that Kerr likes to keep her son private, according to Us Weekly, she and Bloom decided to take a super safe route in sharing them with family and friends: using the disappearing powers (and screen shot notification feature) of Snapchat, as she told InStyle. Though privacy seems to be their foremost concern, Kerr also mentioned in the interview that she loves the filters on there, too, because uh, who doesn't.

“We decided as a couple to keep him private for as long as possible,” she told InStyle. “The only way we send photos of him to relatives on the other side of the world is through Snapchat because it’s such a safe way to communicate. The best part is you don’t have to wear any makeup because the lens does all the work for you.”

Of course, Kerr is a great role model for her kids, as she is undoubtedly a hard worker. Though her family certainly does love their use of social media, Kerr shared with Working Mother that the hardest part of balancing parenthood and a career is just that — learning to unplug.

"It’s important I put down my phone and connect with him and ask how his day was, what he did and anything new he learned. It’s so easy for us to get caught up in trying to do 100 things at once, but they know when you’re distracted and as adults, we know how it feels not to be heard. So it’s important to be present," she told Working Mother. "I have explained to my son that we need to work to provide for our family and he understands that concept now that he’s a little older.” Her trick for getting it all done: multitasking and planning and scheduling everything in.

Certainly every parent can recognize that struggle, but Kerr is such a great example of how to at least try to handle it with grace. It seems that she has her head on straight, whether it's with ethical products, or parenting skills, and she's definitely a role model in so many ways.