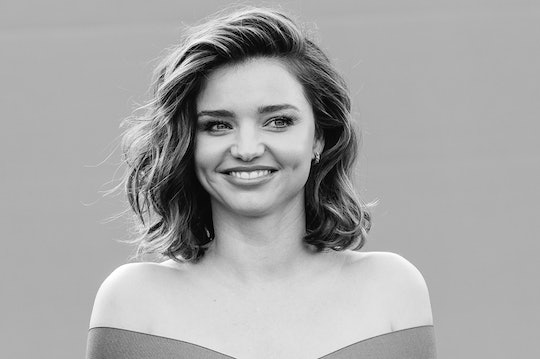 9 Of Miranda Kerr's Loveliest Quotes About Motherhood Over The Years

Supermodel Miranda Kerr gave fans something to really cheer about when she broke the news that she's expecting again. Earlier this months, the model/businesswoman walked a red carpet in Germany and struck a pose, using her hands to show off her new bump. This baby will be Kerr’s second with her husband, Snapchat CEO Evan Spiegel, according to The Independent, and she also shares a son with former husband Orlando Bloom. The supermodel has such a healthy attitude toward pregnancy and being a mom, so this exciting news is a perfect chance to look back and at Miranda Kerr's best quotes about motherhood over the years.

Kerr followed her quiet announcement up with a post on Instagram of the red-carpet moment and simply added emojis for pregnancy, an angel, and a heart. One notable thing about this pregnancy news is that it comes so closely on the heels of her last baby’s birth; she and Spiegel welcomed son Hart into their family just 10 months ago, the Daily Mail reported, so she’ll soon be a mom to two kids under 2 years old! But she’s sure to handle it all in stride.

Here are nine of Miranda Kerr’s quotes about motherhood that make her so relatable, I want to schedule a playdate.