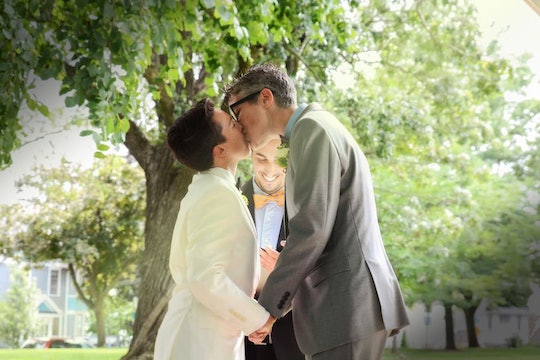 After Two And A Half Years Of Fighting To Get Pregnant, How Am I Expected To Move On?

I don’t believe life begins at conception. But that doesn’t mean our miscarriage doesn’t feel like loss.

In some ways, my wife and I are lucky. The loss occurred in the early stages of gestation, and only our closest family — of origin and of choice — knew we were pregnant, so the people we had to tell about the miscarriage were the exact people prepared to support us through it. In true lesbian fashion, we had already processed this potential outcome, meaning we chose who we told about the pregnancy by deciding who we wanted in our circle if something went wrong.

Then something went wrong. And despite our planning, I felt lost.

There is something incredibly lonely about miscarriage. We learned the pregnancy wasn’t viable, and then the world kept turning. My wife and I talked about it because it was so jarring; our lives were irrevocably different and something we both wanted so badly had been denied, yet time had the gall to continue passing. She went to school the next day. The dishes piled up in the sink. I sent in job applications and paid bills. Life, inexplicably, went on.

It reminded me of the day my foster son was reunified with his birth mom. My heart broke and somehow the world didn’t notice. The world’s ignorance of my pain, the dissonance of the sun continuing to shine and the work schedule continuing to grind and the night continuing to bring dreams is why I didn’t foster again. I now see how naive I was in thinking that choice could keep loss at bay.

My previous experience of loss didn’t make this go-around easier. For my wife, add to our shared emotional distress her physical distress: the blood and the clots and the pain and the realization that her body had made a decision beyond her control. I held her hand and we wept together, but the salt of her tears stung in a different way. We were both wounded, but the world kept on turning even as her body stood still. I could be supportive, but on a certain level, she was and is alone; hurting in a way I will never truly understand.

We never called our pregnancy a baby. It was an egg and sperm, an embryo, a fetus; in fact, the only person to ever say “baby” was the anesthesiologist prepping my wife for her dilation and curettage. By then, I knew this procedure was one of the safest and most common of any performed in the United States, and I also knew this was due to the fact that it was an abortion. Just, in our case, there was nothing to abort.

Maybe that’s why this feels so cruel. We had tried for so long and it had ended in emptiness.

The journey was so long. Not just the tracking of periods and ovulation over time, but also the months of legalese that followed our sperm donor saying yes to sharing his chromosomes. And the year of trying at-home inseminations -- the hours of driving he put in and the times I worried my hands were too shaky holding the syringe. Then came the decision to use a fertility clinic and the requisite six month quarantine for known donor sperm, all before week after week of hormone shots led to day after day of vaginal ultrasounds. Egg extraction, fertilization through ICSI (a tail clip and insertion of the sperm), embryo implantation, what I thought were the longest nine days of my life while we waited for the blood test, and a negative pregnancy result. And repeat, except this time the test was positive and we put the first prenatal ultrasound on the books.

I know we would have loved this little one. They would have been conceived in science, brought into this world with great intention, and raised with love, with so much love.

But the seven-week ultrasound couldn’t verify the pregnancy. It took another two ultrasounds and blood draws before anyone finally told us our pregnancy wasn’t viable. The scans showed abnormalities in the endometrium, my wife hadn’t started bleeding yet and the worry was over a partial molar pregnancy, so the decision was made to perform a D&C. That was the first time anyone had used the word “baby,” and it was in telling us we weren’t having one.

All told, getting pregnant took us two and a half years, cost us $24,000, and ended in the world moving on without us.

There’s still a catch in my throat when I talk about this. And I only talk about it with my family, by which I mean my closest queer friends. Beyond my sister and parents, who have been an incredible support, the only people I want to talk to are fellow queer couples trying to get pregnant. I think it’s because they understand in a way that no one else can, because they know as we do that our pregnancies are always intentional, but that our strongest intentions cannot guarantee our pregnancies.

I know there are straight couples who face incredible challenges in getting pregnant, and I do not mean to diminish their journey. And yet ours is different. Fertility journeys all take time and all take money and all potentially end in a world moving on. But our journey also included six months of waiting on FDA required testing of known donor sperm; if I could produce sperm that would not have been required. Our journey included paperwork that still referred to me as a husband, even on the pages that included my handwritten name. Our journey included the panicked realization that a mere four years ago I would not have been able to hold my wife’s hand through our ER stay; before marriage equality, I could have been denied visitation rights even as uncontrolled post-surgery bleeding mandated a midnight trip to the hospital for my love. Our journey still includes well-meaning straight friends telling us story after story of other couples they knew, couples who had tried IVF without getting pregnant only to end up pregnant “without even trying!” years later. Lucky for these friends, I am too numb to remind that that there is no guarantee.

This couple can’t get pregnant without trying. And I don’t know if our journey will include a happy ending. It hasn’t yet, and we know there is no guarantee.

Our favorite musician is Brandi Carlile. She has been the soundtrack to our love story — our first concert together, the music that was playing while my wife proposed and while we walked down the aisle, our first dance. Her song “The Mother” started playing just as we drove up to the fertility clinic for our egg extraction. We both thought that was a good sign, and we requested her station when the nurse asked us what music we wanted as we waited for the procedure. The song is still playing in my head with these lyrics on repeat:

You are not an accident where no one thought it through

Brandi Carlile wrote this song about her first daughter with her wife Katherine. They named her Evangeline, which means “bringer of good news,” and the song recounts the joy of seeing all the wonders of the world again, “a second time from inside of the ages through your eyes.”

We didn’t have a name; never got that far. But I’d like to think we would have chosen a powerful one. I know we would have loved this little one. They would have been conceived in science, brought into this world with great intention, and raised with love, with so much love. We’re queer, so we’re used to fighting for the right to love. It all would have been so worth it.

But I don’t know what’s next. And, honestly, I’m tired of trying. I’m tired of fighting. I am tired and I am lost.

Life doesn’t begin at conception. But I can’t seem to conceive of a way to move on.

More Like This
Here’s How To Combat Performance Anxiety When Trying To Conceive
4 BIPOC Moms On The Beauty Traditions They’ll Never Pass Down
New Report Shows 80% Of Pregnancy-Related Deaths Are Preventable
Zaya Wade Is Rocking New Long Hair & As Gabrielle Union Put It, She's A "Vision"