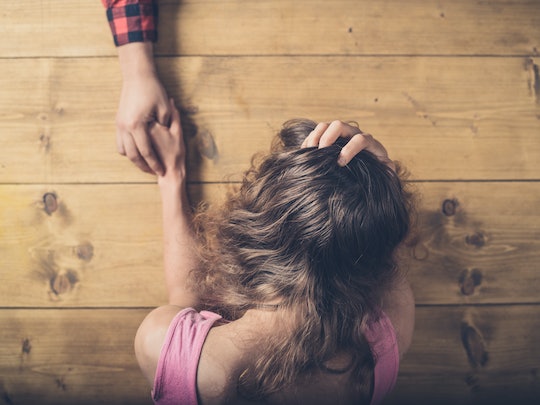 Miscarriage is a scary word, especially when you're in the early days of pregnancy or if you've experienced a pregnancy loss previously. If you're at a high risk for miscarriage, you might very likely find yourself at your computer, repeatedly Googling when you can finally take a deep breath of much needed, and much deserved, reprieve. Thankfully, miscarriage rates by week show a trend that should hopefully have you taking a deep breath relatively soon.

Miscarriage rates by week show that the highest risk lies in the first trimester, which is defined as the first 13 weeks of pregnancy. According to Healthline, about 80 percent of miscarriages happen during this period of gestation. There are a few periods of time to break down during the first trimester itself, and the risk for miscarriage is different during each subsequent period of a woman's first 13 weeks of pregnancy.

First, up to four weeks is the highest risk for miscarriage, according to Check Pregnancy, because there is a 22-75 percent risk that the fertilized egg will not implant. These pregnancies, labeled chemical pregnancies, account for 50-75 percent of all miscarriages, according to the American Pregnancy Association (APA). The APA goes on to explain that most women might not even know they're miscarrying, since the loss happens shortly after implantation. Check Pregnant goes on to explain further, adding the following:

"The risk of miscarriage at 3 weeks and 4 weeks is so great because implantation may fail. The sperm may fertilize the egg, but if the egg fails to implant itself into the uterus, the pregnancy will end in miscarriage."

The site points out that once you have confirmed your pregnancy after your missed period, this risk phase isn't something you necessarily need to actively worry about. (But if you do worry, know that you're fears are valid and, if necessary, something you should discuss with your health care provider.)

Zero to seven weeks marks the highest rate of miscarriage risk, and Healthline explains, "Once a pregnancy makes it to seven weeks with a heartbeat, the risk of having a miscarriage drops to 10 percent." Meanwhile, Check Pregnancy gives you even more reason to be optimistic earlier, reporting that, "By week five, the chances of losing a pregnancy drops to just 10 percent."

After weeks five through seven, your risk continues to drop until it plateaus at about 2-3 percent for the remainder of your pregnancy. Overall, Check Pregnancy reminds us all that the risk for miscarriage decreases with each week of pregnancy that passes:

"If you take a look at miscarriage rates by week, you’ll notice one trend: the risk of miscarriage reduces greatly with each passing week. That’s good news for women who are worried about losing a pregnancy. While miscarriages can and do happen, the odds are in your favor that your pregnancy will continue on to full-term and birth."

Unfortunately, there are a few things that increase your risk for miscarriage, according to Parenting, including age. Healthline explains that the miscarriage rate during the critical zero to seven week period are actually greatly increased by age. Here is the breakdown by age, according to Healthline:

However, there are a few things you can make sure to do that might decrease your risk of miscarriage, according to Parents. Make sure you cut out alcohol and cigarettes, and cut down your caffeine to just 250 milligrams or 12 ounces of coffee a day. Try to exercise regularly and eat a healthy diet. Keeping a healthy lifestyle while trying to conceive and during every stage of pregnancy can mitigate some risk.

Because so many miscarriages are due to chromosomal abnormalities that are outside of our control, genetic testing may be a good option if you are prone to or have experienced miscarriage previously.

More Like This
Barre Could Be The Low-Impact Prenatal Workout You Need
Can You Bowl While Pregnant? Experts Weigh In
Pitocin Induction: What It Is & The Play-By-Play
Considering Getting A Tattoo While Pregnant? Here’s What To Know