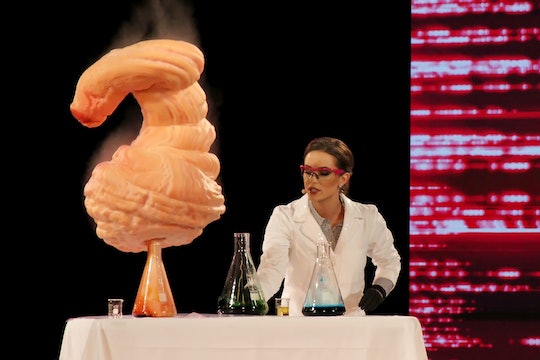 Miss America 2020 Performed An Amazing Science Experiment As Her Talent

Not only was she crowned Miss America 2020 on Thursday night, but Camille Schrier from Virginia also shattered stereotypes associated with the annual competition when she performed a pretty amazing science experiment on stage as her talent.

On Dec. 19, the 24-year-old pharmacy student threw on a lab coat and safety goggles to perform a fascinating chemistry demonstration. "I've loved science since I was a little girl, and now I have the opportunity to pursue the career in science that I had always dreamed of," she explained before her experiment. "Science is a talent and it's my mission to show kids that science is fun, relevant, and easy to understand."

Schirer, a graduate of Virginia Tech University and a current student at Virginia Commonwealth University, demonstrated the catalytic decomposition of hydrogen peroxide, with the help of some potassium iodide, food coloring, and dish soap. "Be careful, don't try this at home," she joked, before producing the prettiest colored, most incredible piles of foam on stage.

The experiment Schrier performed is also known as "elephant toothpaste," according to Scientific American, because the foam produced by the chemical reaction looks like toothpaste big enough for elephants to use. The experiment is quite popular with young kids and something that can easily be replicated at home on a much smaller scale, with some major adult supervision, of course.

The foam Schrier made on stage is produced by the hydrogen peroxide reacting with the potassium iodide, which breaks down into water and oxygen, as Scientific American explained. The oxygen wants to escape, but the dish soap in the experiment traps down the gas bubbles, creating the foam.

Earlier this month, Schrier told NPR that she had been hesitant to compete in the Miss America competition, her dream as a teen, because she didn't have a talent and didn't want to compete in the swimsuit portion. But when the Miss America Organization eliminated the swimsuit portion in 2018, Schrier decided to get creative and turned her passion for science into an engaging and entertaining science experiment as her talent. "I never expected it to be this big," she told NPR.

Schrier will spend her year as Miss America advocating for drug safety and abuse prevention, according to CNN. But, most importantly, she's bringing awareness to the fact that Miss America is a multi-faceted title.

"Miss America is someone that needs to educate, be able to communicate with everyone, and that's what I do as a woman of science," Schrier said during the interview portion of the competition. "And we need to show that Miss America can be a scientist and a scientist can be Miss America."