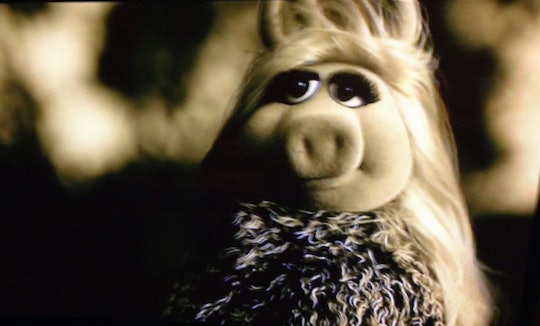 Miss Piggy Covered Adele During The AMAs, & Reactions Were Mixed

If there’s one singer people love to cover, it’s Adele. Since its release in October, “Hello” has spawned countless You Tube covers, as well as some notable celeb versions (looking at you, Demi Lovato!). But one cover we weren’t exactly expecting? Miss Piggy’s. During a promo spot for ABC’s The Muppets that aired Sunday night during the American Music Awards, Miss Piggy spoofed Adele’s "Hello" video, and it got some mixed reactions. We all know that the world is pretty much obsessed with Adele these days, especially since her long-awaited new album, 25, dropped on Friday (and was amaaaaaazing). And the promo was funny. Still, Miss Piggy's Adele impression left some people wondering if the spot was actually fat-shaming our favorite flawless singing goddess, intentionally or not.

Adele has faced her share of criticism in the past about her weight — although naturally, she brushed it off perfectly, because she is a boss — so it's not surprising that some fans are calling out the comparison. Usually, comparing anyone (but especially a woman) to a pig is a derogatory commentary on that person's eating habits, size, or both. On the other hand, this is Miss Piggy we're talking about: a grown-ass woman-pig who has never felt an iota of shame for her eating or body, possibly because she has to save that energy for devastating witticisms and unapologetic vanity. And this was an ad for The Muppets, so presumably the creators a) adore Miss Piggy and b) consider the ad a huge compliment. So. Was the ad fat-shaming Adele, or was it the best possible endorsement?

A Lot Of People Loved It

The Miss Piggy spot became a hot topic on Twitter almost immediately, with people raving about it being hilarious and awesome. Some even called it the highlight of the AMAs — even though, uh, it wasn't actually part of the show. And The Muppets are amazing, particularly in that 80s throwback kind of way — so it makes sense that people would be loving this spot. It’s funny, right?

But Some People Weren’t So Sure

I mean, regardless of what was intended, the promo literally compared Adele to a pig. And if someone compared me to Miss Piggy, I have to admit that I don’t think I’d be super touched, as extraordinary as M.P. is. Maybe that has to do with my own internalized ideas about what body sizes are attractive, but that's where I am. Apparently I wasn’t the only one who thought that:

No matter how well Adele slays as essentially everything she does, she still has to defend her body to critics and has people constantly commenting on her weight, and what she has or has not lost. If complete strangers didn't feel the right to make comments like those below about Adele's body, maybe comparing her to Miss Piggy wouldn't immediately evoke the singer's size, because no one would think Adele's body was any more deserving of criticism and monitoring than anyone else's.

And if Adele's weight weren't fodder for public discussion, it would be easier to think about the ways in which this comparison was awesome. Given everything Miss Piggy has going for her, very few of people on the planet are even worthy of Miss Piggy's attention. Adele is one of those rare humans. So another way of look at this ad is that finally, Miss Piggy found someone up to her standards.