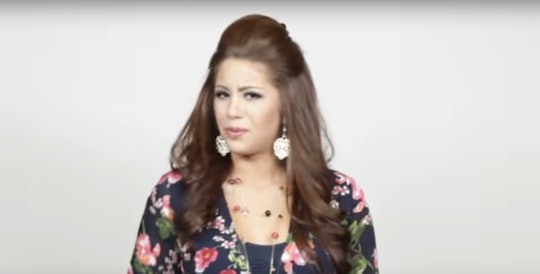 On Saturday, the Miss Puerto Rico Organization suspended 2015's Miss Puerto Rico Destiny Velez, after she went on an anti-Muslim rampage on Twitter. The non-profit organization released a statement on Facebook announcing Velez's indefinite suspension, along with an apology from Velez. The announcement came after the hashtags #nonosrepresentas ("you don't represent us") and #verguenzaajena (which translates to feeling embarrassed for someone else — in this case, Velez) began trending in Puerto Rico.

The former Miss Puerto Rico responded to a Michael Moore tweet on Thursday, when the filmmaker held a sign in front of the Trump Towers declaring "We Are All Muslim." Though her Twitter account is now back in the hands of the Miss Puerto Rico Organization, with the offensive tweets removed, Latin Times reported that Velez tweeted up to 10 pretty xenophobic remarks. "All what Muslims have done is provided oil & terrorize this country & many others!!!!!!" she said, directing the comment at Moore. "There's NO comparison between Jews, Christians & Muslims. Jews nor Christians have terrorizing agendas in their sacred books."

Velez's other words are no less ugly:

Many pull out the card of Muslims serving in our military. Are they in the military cuz they love our nation or to acquire benefits

@MMFlint all they do is build their mosques, feel offended by American values and terrorize innocent Americans and plant gas stations

She then tried to defend her tirade by saying, "@Elevenxvi I don't believe in religion so can't be #Islamaphobic" — though unfortunately, not believing in religion yourself doesn't mean you're immune to hate. Velez eventually realized the error of her ways and apologized via the Miss Puerto Rico Organization, but it was too little too late. In the statement released on Facebook, the organization wrote:

In regards to Miss Puerto Rico, Destiny Velez’s, recent actions and conduct; the Miss Puerto Rico Organization feels that her words do not represent the integrity and esteem of our program, nor that of our board members, our sponsors and partners, or the National Organization.

"I apologize to the people I have offended with my words. I am first and foremost an #UpStander and as such I stand up against bullying. The last thing I wanted to do was to bully anyone. Again, I apologize to anyone who felt offended with my words,” said Miss Velez.The Miss Puerto Rico Organization apologizes for the distress that Miss Velez’s actions and conduct may have caused.

Reactions to the suspension (and Velez's words) have been pouring in on Twitter. Most people believe the organization took the appropriate action by suspending the beauty queen, while others think it was not justified.

Although I am all for free speech, let's not confuse that with a lack of appropriate repercussions. When you choose to voice your opinions, you're putting yourself out there for whatever impacts and reactions it causes — especially when you spread opinions that propagate hate.

When your role means you stand as a positive representation of your community, you better believe that you'll be booted out when you project an ignorant, prejudiced view. Props to the Miss Puerto Rico Organization for taking a stand against prejudice and choosing to listen to the Puerto Ricans saying she does not represent their views.