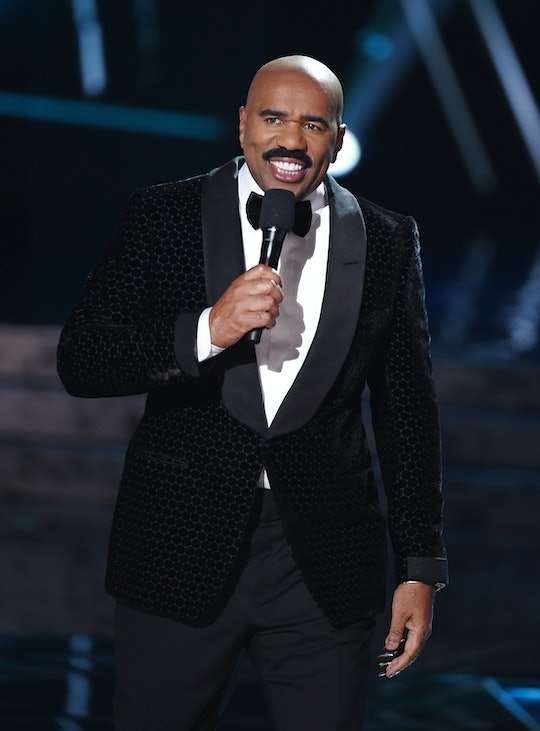 It's no secret that beauty pageants are clinging to relevance in 2015. After all, these are times that celebrate body positivity, that celebrate women for what's inside instead of what's outside. So with pageant ratings down, the scholarship programs need good PR to help them thrive. Because of that, it's little wonder that Miss Universe wants Steve Harvey to host again, despite that whole winner mix-up thing.

And, yes, I did say good PR. Because the instantly viral moment — when Harvey accidentally crowned Miss Colombia Ariadna Gutierrez the winner instead of Miss Philippines Pia Alonzo Wurtzbach — was great PR for the Miss Universe pageant. It put the show in the spotlight, reminding people that pageants did still exist, and their live nature sometimes makes for fantastic television, no matter how you feel about the ceremony itself. Ratings might have been down this year, but after the mix-up, you better believe people are more likely to tune in next year.

So when WME-IMG's Mark Shapiro told the Jim Rome Show that Harvey is welcome back in 2016, it was hardly a shock. As Shapiro said:

He was funny, he was informative, he’s high energy, he’s got a great following ... I definitely want him back, and I would hate to see him not come back. He’s going to want a shot to redeem himself.

And it's likely that bucketloads of viewers are going to want to tune in to watch Harvey redeem himself. (Or make the same mistake again?)

Not to mention the fact that everything Harvey touches turns to gold. Not only is he a best-selling author who helped launch the Think Like A Man film series and the host of his own successful daytime talk show (which is now in its fourth season), but he also has managed to make a decades-old game show, Family Feud, a hit — just by being himself. Could he do the same for Miss Universe?

After all, earlier this year, Family Feud was crowned the No. 1 show in syndication. And that's because of things like this:

Harvey's the king of Feud bloopers. And here's guessing viewers are hoping Harvey can be the king of bloopers when crowning pageant queens as well.