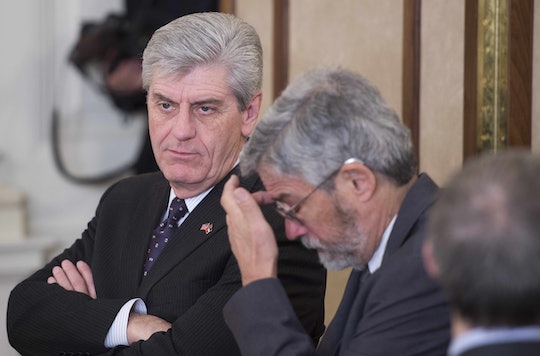 In 2016, there is no issue more important in the election than women's health and women's rights. Between Donald Trump's comments on women needing to be punished for having an abortion it seems as if, in my opinion, some Republican politicians are losing their grip on women's issues, like a woman's right to choose. For example, Mississippi bans some second trimester abortions, further chipping away at abortion rights in an already testy political climate for women.

On Friday Mississippi Governor Phil Bryant signed a bill into place that bans a common second trimester abortion method, dilation and evacuation. This places a further ban on the already incredibly limited abortion rights for the state, as the state only has one abortion clinic for a state with an estimated population of 2,992,000 people living in it. Wow.

During the procedure of dilation and evacuation, or sometimes referred to as D&E, a physician dilates the patient's cervix and removes the fetus using instruments, such as forceps or clamps.

According to Rewire News, receiving a D&E in the state of Mississippi during the second trimester, could make you eligible to receive charges up to a felony, face fines up to $10,000 and up to two years in jail. That is absolutely crazy to me to know that a law like that could exist in a nation that has legalized abortion.

The law, however, makes an exception for D&E if the mother is in an event of a "serious health risk." That means, if the mother has a condition that complicates her medical condition to where an abortion is absolutely necessary she can get one. This condition does not include psychological or emotional conditions.

According to the AP, Diane Derzis, who owns the only abortion clinic in Mississippi, has said that her clinic does abortions up to 15 weeks and typically doesn't use the procedure. This makes the law even more overreaching to further chip away at the rights of women and their right to choose.

This ban on D&E abortions further proves just how important it is to vote in your elections and let your voice be heard, for the sake of women's bodies everywhere — not just in Mississippi.