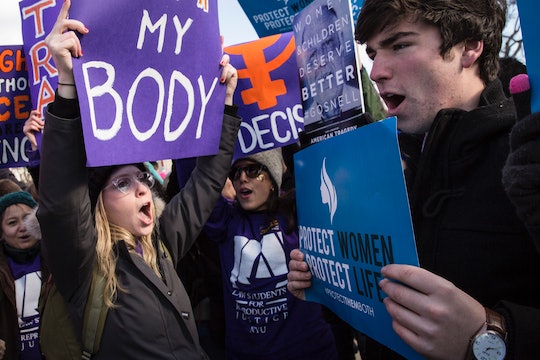 One Missouri representative apparently believes the history of abortion belongs in the Missouri State Museum as an exhibit — and he thinks it should go near the slavery exhibit. According to Rewire, Rep. Mike Moon, a Missouri Republican, wants to make an abortion museum exhibit that would feature abortion tools throughout the ages and their effects on "abortion victims." In his bill proposal, he drew comparisons to the Holocaust and slavery.

Proposed on Feb. 22, Moon's HB 1014 bill is called the "Never Again Act," a title that echoes a phrase often associated with the Holocaust, "Never again." And that comparison is no mistake — in fact, it's a comparison that Moon wants people to make. In a blog post on his website, he said:

The number of lives lost by abortion is more than we lost during slavery and during the Holocaust. ... We need to start looking at abortion in the same light as we do both of those tragic events.

In an interview with Missouri Net, Moon had more comparisons to draw between the two tragedies and abortion. "The constitution stated that they would only be three-fifths of a person," Moon said of slaves. "Many people say an unborn developing human baby is not a person until he or she takes her first breath. So there is a comparison there that we’re actually stating that they’re not humans."

Unsurprisingly, pro-choice advocates were not on board with Moon's proposal or the comparisons he chose to use. "Not only is Mike Moon obsessed about outlawing abortion in Missouri, instead of feeding hungry children, but he is also a racist and a bigot," Alison Dreith, executive director of NARAL Pro-Choice Missouri, told Rewire. "The Missouri Republican Party needs to stand against Moon’s hate, yet they condone it by rapidly giving his bills hearings and attention by passing them out of the house."

Dreith suggested that if an abortion exhibit were to take up permanent residence in the Missouri State Museum, that it should include a history on men's control of women's bodily autonomy and women's fight for their right to health care.

I just find this whole connecting any of this to slavery or holocaust, which nothing compares to what happened in the holocaust. I have holocaust survivors in my family. To do that, I just feel is just inflammatory. It is disgusting beyond belief.

In the past, Moon also attempted to pass a personhood bill under the title "All Lives Matter" — a bill that, fortunately for pro-choice advocates in the state, failed to pass. Now, those in Missouri who oppose Moon's new bill should phone their representatives and make their voice heard.