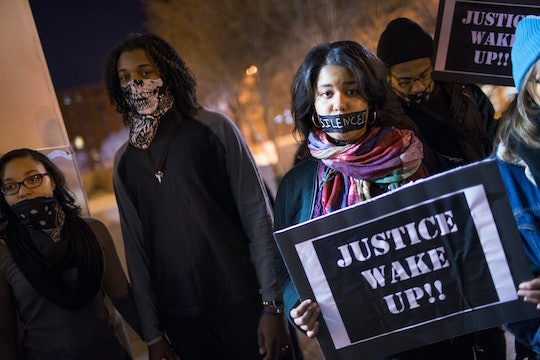 In the past decade in Missouri, gun safety has gone from bad to worse: According to research by the Violence Policy Center, more people in the state died from gun violence in 2014 than they did from car accidents. The Center for American Progress rated the state as one of the worst in the country for levels of gun violence, with a gun-murder rate 56 percent higher than the national average. Considering that Missouri is also home to some of the worst gun death rates in the United States for women, children, and people of color, Missouri's new no-permit gun law is scary news for many.

According to The New York Times, Senate Bill 656, whose veto by Gov. Jay Nixon was recently reversed by Missouri lawmakers, will allow people to carry concealed firearms without a criminal background check, training, or a state gun permit. The new law will go into effect on Jan. 1, relaxing gun laws in a state that already has incredibly lax gun regulation — and incredibly high rates of gun violence to go with it. By pushing through senate bill 656 (a move that the National Rifle Association is already applauding), Missouri lawmakers are further endangering those at risk in their communities.

These laws lower the cost of using lethal force. Our study finds that, as a result, you get more of it.

That translates to 500 to 700 more homicides per year across the United States, according to Hoekstra. And according to research published last year, Stand Your Ground laws tend to favor white people: the murder of a person of color is far more likely to be deemed "justified" under SYG laws than the murder of a white person. Considering that Missouri already had the second highest black homicide victimization rate in the United States, and that the number of "justifiable" deaths doubles in SYG states, people of color in Missouri will likely be disproportionately affected by Bill 656.

Considering that Missouri's new law will allow citizens to carry concealed weapons without a background check, women and children will also be unfairly affected by Senate Bill 656, since the law will allow those with domestic violence backgrounds to purchase weapons. According to the Center for American Progress, 55.7 percent of domestic violence homicide victims killed in Missouri over a nine-year span were murdered using guns. The state ranks seventh worst in the country for its rate of women murdered by men. Loosening gun laws means removing police's ability to disarm domestic abusers.

Finally — and perhaps most worrisomely — children will be affected by this. In 2015, five toddlers shot themselves in Missouri, and in 2010, 62 children (under the age of 18) died from gun violence, making the state the sixth highest in gun deaths among children for the year.

By relaxing gun access, Missouri is failing to protect its vulnerable communities. For real change to take place in the state, Missouri will need to reverse its backwards laws regarding guns, and listen to the people actually being affected by their firearm regulation — or rather, their lack thereof.