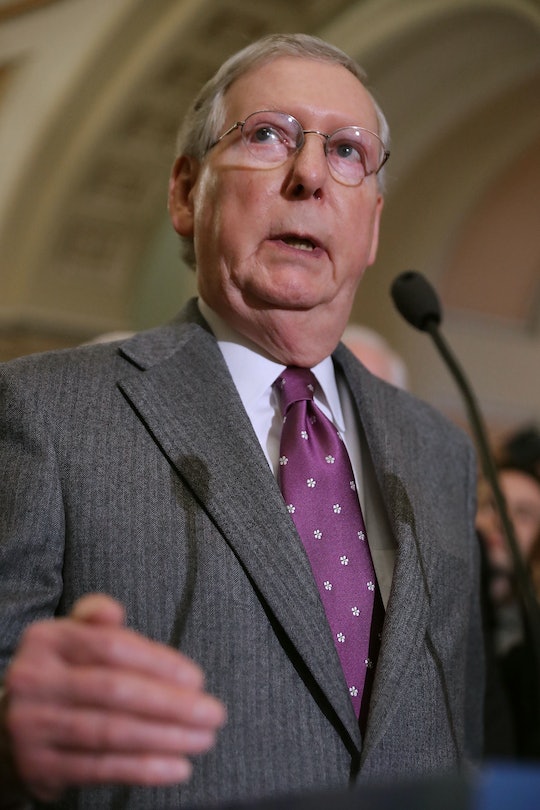 GOP: Don't Block SCOTUS Nom, Even Though We Did

Following the death of Supreme Court Justice Antonin Scalia last February, President Obama was quick to nominate a replacement, Merrick Garland, just a month later, so that the Supreme Court could carry on with its business. But Senate Republicans refused to even give Garland a confirmation hearing, in the name of waiting for the election to play out and see what other options a Republican president might offer. On Wednesday, Senate majority leader Mitch McConnell said that Democrats shouldn't block any Supreme Court pick, even though the Kentucky senator has been running a campaign since Scalia's death for Republicans to do just that when it comes to Obama's selection.

Garland's nomination expired on Tuesday, as the GOP held out for President-elect Donald Trump to take office and nominate his own Supreme Court pick. So now it's going to be all-out power struggle to get another justice nominated to the court under a Trump presidency.

McConnell said Wednesday in a press conference that "the American people simply will not tolerate" the Democrats blocking their pick. In fairness, many Americans were not exactly "tolerating" the GOP's decision to block the Democrat's choice of a replacement. It's hard to figure out what McConnell's priority is — winning a fight or serving the American people.

Last spring, Republicans cited the "Biden-rule" when they decided to not take Obama's nomination seriously. That refers to a 1992 statement from then Sen. Joe Biden who said, in a hypothetical situation, that lawmakers should be wary of nominating a Supreme Court justice in an election year, since the ideology of the court could be changed before the American people had a chance to have their say about a new president.

In fighting against Obama's nomination last year, McConnell said Republicans had every reason to deny Garland a hearing, since Democrats were wary about nominating two of George W. Bush's picks — Justices Samuel Alito and John Roberts — before election years. As we all know, though, both of them are now serving on the court, so someone compromised.

It is very ironic that McConnell is calling out Senate Democrats, particularly New York Sen. Chuck Schumer, for vowing to give whoever Trump picks for the Supreme Court vacancy a hard time.

On Tuesday, Sen. Schumer merely made a speech saying that Democrats plan to hold the President-elect accountable for his actions, which is what spurred McConnell to attack Democrats for their stance on whomever (there is still no official nomination) Trump might have in mind for the coveted gig. That's a very different thing than what Republicans said back in 2008, when they vowed to "block everything" everything Obama wanted to do.

There's a little nuance to this fight — maybe it's not best to pick a new Supreme Court justice in an election year. Sure, let's all talk about that. But accusing the Democrats of holding up the democratic process after Republicans, under McConnell's leadership, held up the democratic process for the entire eight years of Obama's presidency seems a little like a case of being able to dish it, but not take it. Is it about winning or giving Americans a full court to decide on issues that affect their daily lives?

This power play should be irksome to every American voter, no matter their party affiliation. The Supreme Court is arguably the single most important entity in government — it's the last stop for deciding whether legislation adheres to our Constitution. Which is exactly why both parties would prefer to stack the court with justices who agree with their policies and views of what the government should and shouldn't be able to do.

The culture in D.C. right now seems to be more about a fight between party leaders than it is about doing what's right for the public. It's tempting to want to cheer Schumer on and give Republicans a taste of their own medicine. It's tempting to back McConnell and agree that something has to give after eight years of a stalemate.

Right now, there are two extremely ideological views coming from each party, which is why a battle over who takes Scalia's seat in the Supreme Court is so important. But what Americans really need is for party leaders to step back from their egos and pet projects and actually discuss the issues instead of whining, like kids caught fighting on the playground, about who started it.