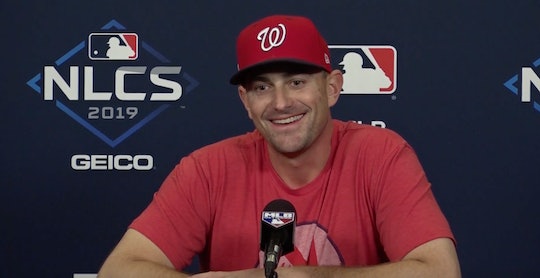 MLB Player's Message To Paternity Leave Critics: "My Family Is Top Priority For Me"

As much as couples might attempt to plan the birth of a child around their busy schedules, they ultimately discover this: Babies wait for no one and nothing. Barring a planned C-section, it's difficult to peg when exactly labor and delivery might pan out. All of this can be highly inconvenient for working parents, in particular. However, an MLB pitcher who was criticized for prioritizing paternity leave has responded to those who don't get it with a powerful message.

Daniel Hudson — a relief pitcher for the Washington Nationals — recently missed Game 1 of the National League Championship Series in order to be present for the birth of his daughter, according to ESPN. His wife Sara delivered their third baby girl, Millie, Friday in Scottsdale, Arizona. Originally, Sara had been scheduled for induction for Oct. 10, in between the National League Division Series and the NLCS. But, she ended up getting induced later than expected.

"I knew I was going to go no matter what," Hudson told reporters ahead of Game 2. "I didn't know that this was a new thing, to have a playoff paternity leave list. I had no idea. I was like, 'I can't be the only person to have a baby in the middle of the postseason.' And for it to blow up like it did, man, it's kind of crazy. But I didn't really give much thought about not going. My family is top priority for me."

The average person's reaction to such news might be something like, "Oh wow, good for him!" or "Congratulations on your perfect, sweet baby!" However, not everyone was thrilled about Hudson choosing to miss an important game in order to witness the birth of his child.

One Twitter user wrote, "If I were an MLB player in the NLCS, the biggest games in franchise (at least Washington) history, my wife would understand and insist I be there."

Another person tweeted, "Seems selfish to me, why have kids in season where you only get a few days off when you could do so in the off-season and have unlimited time with the family."

Yet another Twitter user wrote, "Unreal that Daniel Hudson is on paternity list and missing game 1 of #NLCS. Only excuse would be a problem with the birth or health of baby or mother. If all is well, he needs to get to St. Louis. Inexcusable. Will it matter?"

The Nationals beat the Cardinals 2-0 in Game 1, for the record. So yeah. The team managed to get along just fine without their closer, who instead watched the game from his wife's postpartum hospital room. Although Hudson deleted his social media accounts a few years ago, he still caught wind of the backlash circulating on Twitter. And he decided to set the record straight ahead of Game 2.

"I went from not having a job on March 21 to this huge national conversation on family values going into the playoffs," Hudson told reporters going into Game 2. "Life comes at you fast, man. I don't know how that happened and how I became the face for whatever conversation was going on. Everybody's got their opinions, man, and I really value my family and my family time."

In addition to having the full support of the Nationals, one of Hudson's teammates stood up for the father of three as well. "If your reaction to someone having a baby is anything other than, 'Congratulations, I hope everybody's healthy!' you're an *sshole," Sean Doolittle told reporters, according to Bleacher Report.

Twitter's reaction since Hudson has spoken out against the backlash has been amazing, for the record. One person applauded his decision — while also imploring more people to follow suit. They tweeted, "Daniel Hudson skipping Game 1 should be a lesson for everyone. Chances are if the Nats can get by without him for a day, your office can get by without you for a day. Go do life stuff. Take a mental health day. Keep your cough at home. Everything will be fine."

Another Twitter user wrote, "If you’re making $5.5 mil a year and your team needs you to close in the NLCS well, yeah, go see the birth of your 3rd kid or your 12th. Being a father is more important than a baseball game. Good for Nats closer Daniel Hudson, shame on any 'husband, father' who thinks otherwise."

Personally, I'm so glad Daniel Hudson was able to be there for the birth of his baby girl — even though the timing was less than ideal. I love, too, that being present for the labor and delivery was never really question for him. Shame on anyone suggesting that Hudson was being "selfish" for this decision. And kudos to the Nationals and to MLB for not forcing players their choose between keeping their jobs and being present for the birth of a child.

More Like This
Kim Kardashian Says She's "Shaken" By Balenciaga's Ad Campaign Featuring Children
"Corn Kid" Handed Out Over 40,000 Cans Of Corn At A Food Bank Ahead Of Thanksgiving
Andy Cohen's 3-Year-Old Son Ben Has Officially Taken Over An Important Hanukkah Tradition
Ryan Reynolds Jokes He "Should Sweep Or Something" To Get Prepped For Baby #4